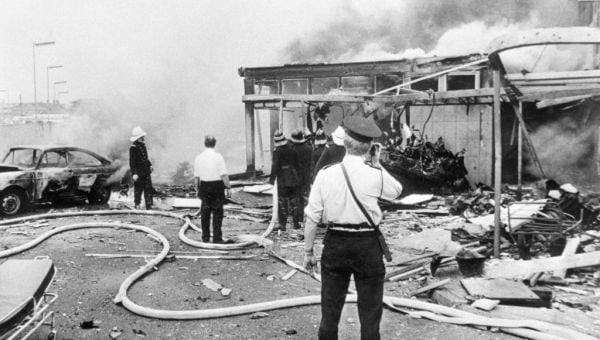 The day that Belfast city centre was devastated with 22 bombs in around 80 minutes feels as vivid today as it did 50 years ago, the daughter of one of the nine people killed has said.

Lynda van Cuylenburg’s father Jackie Gibson, who was 45 and a bus driver, died in a blast at the former Oxford Street bus station.

“That it was 50 years ago doesn’t mean anything to us as his family, it’s still as vivid today as it was on the day,” she said, of the day the city was plunged into chaos.

“Our dad has missed marriages, births, grandchildren, he’s missed everything.”

The bombs started at 2.10pm on July 21st, 1972 at Smithfield, and continued across the city centre, including main thoroughfares such as York Street and the Crumlin Road as well as the railway station at Great Victoria Street, Botanic Avenue, the Liverpool ferry terminus, Queen Elizabeth Bridge, an M2 bridge, filling station and an electricity sub station at Salisbury Avenue.

A mother of seven, Margaret O’Hare, 34, Brigid Murray, 65 and Stephen Parker, 14, died in the blast close to shops on the Cavehill Road.

The day has since become known as Bloody Friday.

The Provisional IRA issued an apology in 2002, and said it had not been their intention to kill “non combatants”.

Mrs van Cuylenburg was 15 at the time of the bombings.

She recalled having just returned from a Boys’ Brigade and Girls’ Brigade camp on the Isle of Man with some of her siblings.

“We were picked up by friends from church and brought home, and we actually saw daddy driving his bus into town, and he saw the cars and waved to us,” she told the PA news agency.

“That was the last time we saw him alive.

“I don’t think I could explain the massive impact it had. That was it, he was gone, and my mum was left to bring five children up. It was devastation to our family to lose our father at 45.”

Mrs van Cuylenburg said her family do not believe they will ever see justice for those who were behind the bombs.

“Nobody ever gives up on it but we’re not going to get it. How many families have in all this time? You could count on one hand maybe,” she said.

She described the IRA’s apology as “meaning nothing”, adding, “if you’re going to plant bombs, people are going to get hurt or worse”.

She also said while the atrocity is not mentioned as much as opposed, footage of the bus centre in the aftermath is regularly used in coverage of the Trouble.

A reflective event will be held at Belfast City Hall on Thursday for relatives of the victims.

Translink, which currently runs Ulsterbus, is also set to mark the date.

Mrs van Cuylenburg said a plaque will be unveiled at Ballygowan Bus Station, where her dad had collected the bus he drove that day.

“This is the last time I reckon we will ever get the chance to say anything because this is a major anniversary,” she said.

Kenny Donaldson, director of services for the South East Fermanagh Foundation, described Bloody Friday as an attempt to terrorise the community and cause significant destruction.

“However, the greater and most significant loss that day was the loss of human life,” he said.

“Those who perished that day were as young as 14 years and the oldest was just of the former retirement age at 65 years.

“It is still so powerful 50 years on viewing the footage of that time and the sheer horror and panic which existed as people literally ran from one bomb whilst potentially running into another.

“Bloody Friday has never had the focus that it should have had and whilst we are some 50 years on it is important that this unsolved crime receives genuine focus and concern.”

He added: “We will continue to do so. We will resist the efforts of others who would wish to airbrush away the gravity and horror of that day.”

A spokesperson for Translink said: “Our bus drivers provide a vital service every day for everyone, making them part of the very fabric of our community.

“We have a memorial plaque in our Laganside Bus Station as a permanent mark of remembrance for these colleagues.

“A group of drivers and staff at Ballygowan bus depot have arranged a commemorative plaque in memory of those who lost their lives while delivering public transport on 21st July 1972 which will be unveiled next Thursday morning (21st July).”