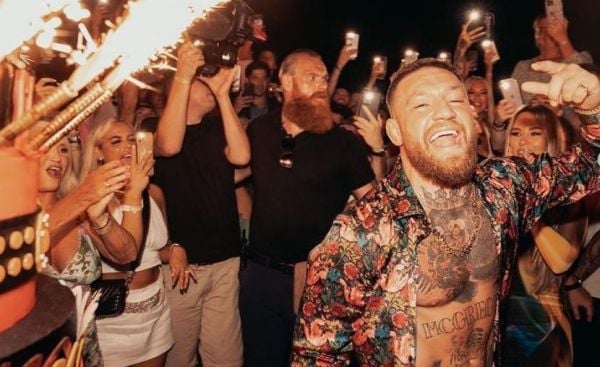 Conor McGregor has shared photos from inside his luxury birthday bash in Ibiza, featuring a huge birthday cake, signature cocktails including one named ‘The Notorious’, and models holding champagne.

The mixed martial arts (MMA) fighter treated his friends and family to the no-expense-spared party at the Spanish island to celebrate his 34th birthday.

Among the guests was his fiancée Dee Devlin, mother Margaret, sisters, and many more friends and family members.

Photos from inside the event, shared online by McGregor, show a signature cocktails menu made with his own Proper Twelve whiskey, models holding champagne bottles, sparklers and a birthday cake featuring a UFC belt.

The Crumlin native shared a carousel of snaps on Instagram, writing: “What a birthday party, thank you team.”

“Ain’t No party like a Mac Daddy party #ibiza,” he captioned another series of pictures.

McGregor, who turned 34 on Thursday, had his luxury yachts brought out to Ibiza ahead of the birthday celebrations, according to the Irish Independent.

He also arranged for his Black Forge bus to carry dozens of his friends and family to Dublin Airport to be flown to Ibiza for the party.

The MMA fighter jetted out to Ibiza on Thursday, with family and friends also taken over on a specially hired large jet, which can hold over 100 passengers.