Explained: How can flying first class increase your carbon footprint? 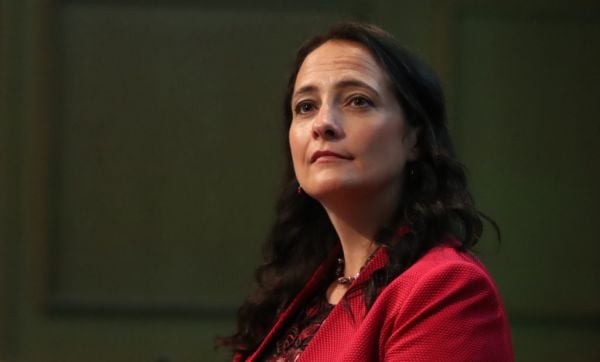 Minister for Tourism, Culture, Arts, Gaeltacht, Sport and Media Catherine Martin came under fire earlier this week when it was revealed that she had opted to fly business class for a number of overseas visits representing the Government over the past year.

The Irish Independent reported that both the Green Party’s deputy leader, Ms Martin, and leader, Minister for the Environment Eamon Ryan, had “booked business class flights” despite such journeys having a much higher carbon footprint than their economy counterparts.

But how can someone flying in first or business class be responsible for more emissions than someone back in economy on the same flight?

While there is debate as to how best to calculate the amount of emissions generated by air-travel, it is accepted that the space and baggage allowance that your ticket entitles you to factors in to how much CO2 is associated with your trip.

Seats in the economy section of aircraft are condensed, offering passengers less room in order to fit more seats, therefore reducing each economy passenger’s individual ‘load’ as the flight’s emissions are divided among a larger number of people.

Meanwhile in economy or first class, the added cost of the ticket usually translates to having more room on the flight, which means less seats can fit in that section of the aircraft, increasing the ‘load’ of those passengers.

A 2019 report published by the International Council on Clean Transportation (ICCT) noted: “Premium class seats, and the amenities that go with them (e.g., dedicated lavatories, galleys, bars, and showers), take up a larger footprint compared with economy seats.

“With fewer passengers on each flight and larger footprints, the emissions credited to premium passengers per kilometre are greater than for economy passengers.”

So, what is the difference in emissions?

Again, as calculation methods differ, it’s hard to determine the exact difference between the emissions attributed to an economy class journey compared to the same journey in business or first class.

The ICCT report found “premium passengers on a regional aircraft are apportioned 2.6 times more CO2 per kilometre than a passenger in economy”.

In addition, it said the multiplier is “even higher for narrowbody and widebody aircraft, at 3.7 and 4.3, respectively”. These figures also echo a 2013 study by the World Bank Group which said premium travellers account for three times the emissions of economy travellers.

The Internation Civil Aviation Organisation (ICAO) carbon emission calculator is often used to estimate the carbon footprint of a flight, taking seat-class into consideration. While the calculator uses a simplified calculation method, it too illustrates the greater environmental impact of premium flying.

For example, the calculator shows that a one-way flight from Dublin to New York’s John F Kennedy Airport emits approximately 40,506.3kg of CO2.

It further breaks this down to about 279.9kg of CO2 per economy passenger, but 559.8kg per premium (business or first class) passenger, giving these passengers a carbon footprint twice that of their economy counterparts for the same 5,100km journey.

What was the Government’s response?

While some members of the Government, such as Minister for Public Expenditure Michael McGrath, were quick to point out that they only fly economy when travelling on State business, Ms Martin did get the backing of her party leader, as well as Taoiseach Micheál Martin.

Mr Ryan and Mr Martin both said there was a case to be made for ministers flying in economy class due to the heavy workload they often face while representing the Government abroad.

“You’re there representing the country and you want to do your best,” Mr Ryan told Virgin Media’s The Tonight Show.

“You’re often getting off that flight and going into 12 hours of meetings, literally one after another, where you’re representing your country.

“If you can arrive in a way that helps you represent [the country] best, then I believe it is appropriate to take it.”

Is it back to economy class for the Minister?

Despite the kickback, and perhaps bolstered by her Cabinet colleagues’ support, Ms Martin has said she will fly business class again “if it’s needed”.

The Minister said she would not commit to never again flying premium, adding that “if it’s in line with policy” and necessary due to the nature of the trade mission and its itinerary, then she would opt to fly economy.