THERE is still a round of games to be played to the JJ Kavanagh & Sons Senior Hurling Championship but already we know the four semi-finalists.

The key game in determining the final four over the weekend was the game between Bagenalstown Gaels and Naomh Eoin. Naomh Eoin knew they had to win to keep their hopes of making the knockout stages alive but it was Bagnalstown who came out on top thanks to goals in either half by Jamie Clarke and Paddy McDonnell.

Eoin Larkin’s Ballinkillen laid down a marker for later in the Championship with a fine victory over St Mullins. They started brilliantly with early goals from Mark Foley and Patrick Kavanagh and led 2-9 to 0-4 at half time. St Mullins did battle back in the second half, restricting Ballinkillen to just five points in the second period, and pulled a goal back through Paddy Boland but still ended up on the wrong end of a 2-14 to 1-9 scoreline.

As expected, Mount Leinster Rangers proved far too strong for Naomh Bríd. It took the champions some time to fully click into gear and Naomh Bríd were just 0-7 to 0-4 behind at the half time break but Rangers showed their class in the second half and ran out 2-20 to 1-8 winners after two goals from Evan Kealy. 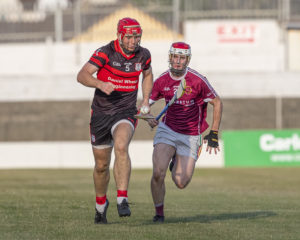 The Intermediate Championship is finely balanced after wins over the weekend for Mount Leinster Rangers, Bagenalstown Gaels and Carlow Town and a fascinating final round is in store next weekend.

Meanwhile, the semi-finals for the Junior Championship have been fixed for next weekend. Burren Rangers will play Naomh Bríd on Friday at 7.30pm, while Mount Leinster Rangers will play St Mullins on Saturday at 3.30pm.

Make sure to see Tuesday’s Nationalist for much detail on all these games.