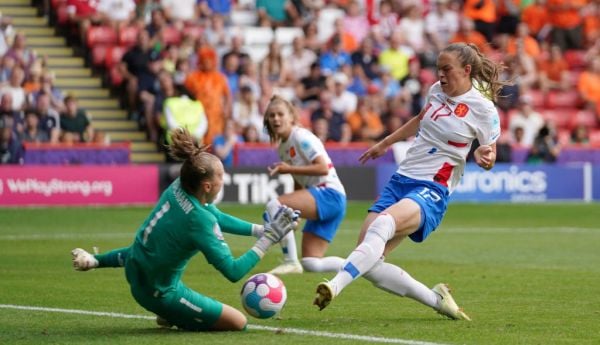 Substitutes Romee Leuchter and Victoria Pelova saved the day with late goals for the Netherlands as they progressed to the knockout stages of Euro 2022 after a thrilling 4-1 win at Bramall Lane.

With the scores level at 1-1 entering the final stages of the game, the Dutch duo scored three goals between them in a destructive final 10 minutes for Mark Parsons’ side.

The result means that Switzerland are out of the competition, while the Netherlands finish Group C as runners-up and will face France in the quarter-finals.

Switzerland were in control for the opening 10 minutes, moving forward well and Sandy Maendly had their first chance with a curling effort from outside the area that was destined for the top corner but Daphne Van Domselar made a brilliant save to tip the ball over the crossbar.

The Netherlands had a chance 20 minutes in when Lineth Beerensteyn broke forward quickly and her shot deflected off goalkeeper Gaelle Thalmann but, despite the forward being brought down, a VAR check by the referee ruled no penalty would be awarded.

The Dutch came close again after a smart free-kick threaded through a crowd of players in the box, but Jackie Groenen’s powerful effort was well-held by Thalmann, while Switzerland continued to pose a threat with Geraldine Reutler and Ramona Bachmann both coming close.

The Netherlands took the lead through an unfortunate own goal three minutes after the break when Ana-Maria Crnogorcevic was unable to clear a corner and instead nodded the ball into her own net.

Switzerland quickly responded with an equaliser four minutes later after Bachmann played Reutler through and she made no mistake tucking the ball into the bottom corner.

They continued to attack and nearly had a second when Coumba Sow had two excellent chances from close range, but Van Domselar came to the rescue again to clear the danger.

Both teams continued to press hard for a decisive winner and substitutes Leuchter and Pelova caused havoc, scoring three goals in the final stages of the game.

Leuchter scored in the 84th minute with a looping header that caught Thalmann off guard, before Pelova poked home from close-range two minutes later, with the goal eventually being awarded after a lengthy VAR check.

Leuchter capped off a destructive 10-minute spell for the Netherlands in added time, scoring her second after slotting home Pelova’s initial scuffed shot for the Dutch to progress to the knockout stages.