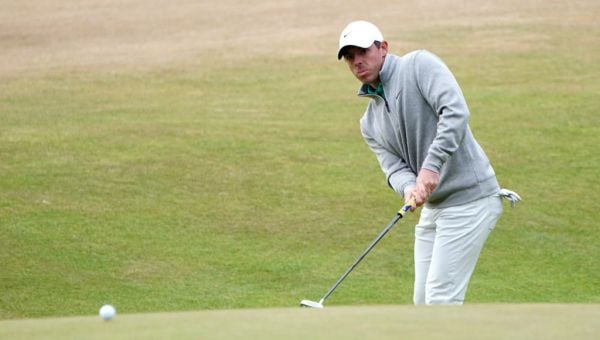 Rory McIlroy is confident he can get the job done in the 150th Open Championship and win his fifth major, eight years after his last success in golf’s elite events.

McIlroy lifted the Claret Jug in 2014 and won the US PGA Championship a month later, having made his major breakthrough at the US Open in 2011, but a barren period has followed.

He has had 16 top-10 finishes since, including three this year, and came into the event in some of his best form in recent years.

“I’ve got myself in a great position after three days. I finished off enough golf tournaments in my time to feel like I know what to do,” said the Northern Irishman, who goes out last with Viktor Hovland, with the pair both on 16 under.

“I think for me it’s expect the unexpected. But, at the same time, I have to focus on myself.

“If I go out and I post a good number, I can’t worry about if it’s Viktor or if it’s the two Camerons (Smith and Young), if it’s whoever it is.

“I just have to do my thing and I’ve been doing my thing for the last three days and it’s put me in a good position.

“I’m not going to take anything for granted.

“Nothing’s given to you and I have to go out there and earn it, just like I’ve earned everything else in my career.”

McIlroy attributed it to part-skill, part-luck but admitted holing a bunker shot for an eagle two on the 10th was “a bonus”. The Northern Irishman splashed out and basked in the roars of the crowd as the ball gently rolled towards the hole and dropped

Low scores are out there ⬇️@K_Kisner posts his best round @TheOpen pic.twitter.com/zSbaRhCMT7

The American took advantage of favourable conditions early on with a birdie blitz. Kisner, the world number 25 who made the halfway cut right on the mark of level par, was in the second group out just after 8.30am, but no-one would have predicted the fireworks which followed. His outward total of 30 was two short of the record lowest score for an Open front nine – set by Denis Durnian at Birkdale in 1983 – and one off Tony Jacklin’s St Andrews front-nine Open best from 1970. It included six birdies in his first eight holes and, frustratingly for the 38-year-old, he also left two good other opportunities marginally close in a remarkable display of consistently-good putting. His back nine could never live up to what went before but three birdies and two bogeys saw him catapult himself up the leaderboard from joint-last to tied 13th at the close

Quality viewing @TheOpen. The unpredictability of The Old Course from bounces to weather is unlike anything in golf. Can’t turn it off. Thinking pace of play might have improved with a shotgun start? What you guys think?

Tiger Woods has been – at any given moment – the youngest man with five or more major wins for almost 22 years. Rory McIlroy will change that with a win on Sunday.

The 495-yard par-four 17th played as the toughest hole for the second day running, yielding just one birdie all day, with 44 bogeys, three doubles and one triple-bogey, resulting in a scoring average of 4.63.

The driveable 352-yard par-four ninth. There were seven eagles, 50 birdies, just one bogey, for a scoring average of 3.24.

Becoming dry after light overnight rain and turning increasingly bright towards midday. Wind up to 12mph in the morning, gusting to 18mph in the afternoon, easing to five to 10mph in the evening.