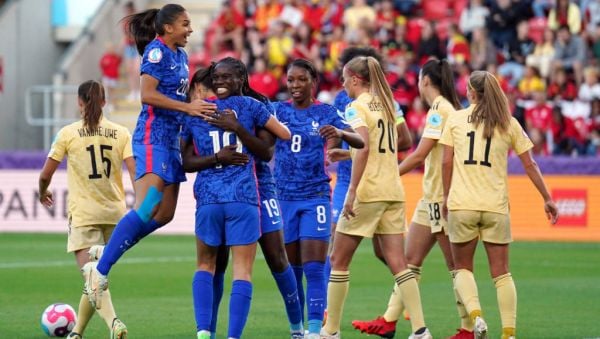 The last quarter-final berth will be filled on Monday night as Group D rivals Iceland, Belgium and Italy bid to secure second place.

Group leaders France have already qualified for the last eight, but opponents Iceland are hoping to spring an upset in their clash in Rotherham, while Belgium and Italy face off in Manchester with high hopes of their own.

Here, we look ahead to Monday’s action after Sweden and the Netherlands reached the knockout stages with resounding wins on Sunday night.

🇮🇸🇫🇷”I hope we will be well prepared tomorrow and I hope that we will be in a great mood and feel comfortable on the pitch,” says coach Þorsteinn Halldórsson for the game against France tomorrow @WEURO2022 !#dottir pic.twitter.com/kmobSInwYO

Iceland face a daunting task against already-qualified France at the ASSEAL New York Stadium. But if Iceland win, they qualify and they can still progress if they avoid defeat while Italy and Belgium draw.

France sealed a last-eight clash and ensured they finished top of the group with their second win against Belgium last week and they will play the Netherlands at the same venue on Saturday.

Iceland, who drew both previous group games against Belgium and Italy 1-1, will be at full-strength for their group decider, while France will be without striker Marie-Antoinette Katoto due to a tournament-ending knee injury.

Italy and Belgium both eye prize

Italy will hope to kick-start their tournament at the Manchester Academy Stadium and must beat Belgium and hope Iceland do not pull off a shock win against France.

Milena Bertolini’s side lost their opening group game against France 5-1 and secured their solitary point so far from a 1-1 draw against Iceland in their second match.

Belgium are also chasing their first tournament win after they followed up an opening 1-1 draw against Iceland with a 2-1 defeat to France, while victory for them against Italy will see them advance if Iceland fail to win.

Manchester City’s Filippa Angeldahl scored twice as Sweden cruised through to the last eight, where they will face Iceland, Belgium or Italy on Friday.

Arsenal forward Stina Blackstenius was also on the scoresheet at the Leigh Sports Village as Peter Gerhardsson’s side finished above the Netherlands on goal difference.

Angeldahl’s double and Carole Costa’s own goal gave the Swedes a 3-0 half-time lead before Kosovare Asllani’s penalty and a late stunner by Blackstenius saw Sweden win in style.

The Netherlands face France in the quarter-finals after scoring three late goals through substitutes Romee Leuchter and Victoria Pelova at Bramall Lane to secure a 4-1 win.

With six minutes remaining, the scores were level at 1-1 before Leuchter struck twice, either side of Pelova’s effort, in a destructive final 10 minutes from Mark Parsons’ side.

The Netherlands had taken the lead early in the second half through Ana-Maria Crnogorcevic’s own goal but Switzerland responded four minutes later when Geraldine Reutler tucked home Ramona Bachmann’s through-ball.

Stat of the day

Our #Lionesses and #ThreeLions linked up for our brand new game: Back and Forth!

Picture of the Day