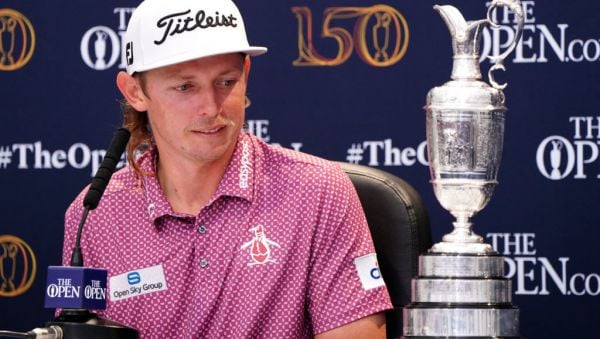 Australia’s Cameron Smith faces questions about his future after claiming his maiden major title in brilliant fashion in the 150th Open Championship at St Andrews.

Smith overturned a four-shot deficit courtesy of his second 64 in the space of three days, the 28-year-old from Brisbane finishing 20 under par to beat the previous record on the Old Course of 19 under set by Tiger Woods in 2000.

An eighth birdie of the day on the 18th gave Smith a one-shot victory over playing partner Cameron Young, who eagled the final hole, with 54-hole co-leader Rory McIlroy a shot further back following a closing 70.

“I think to win an Open Championship in itself is probably going to be a golfer’s highlight in their career. To do it around St Andrews I think is just unbelievable,” said Smith, who declined the chance to deny reports linking him to the Saudi-backed LIV Golf series in his winner’s press conference.

“It’s unreal to look at these names on this trophy and then add mine, I’m lost for words. I’m definitely going to find out how many beers fit in this thing (the Claret Jug), that’s for sure.”

Asked about the possibility of joining the breakaway LIV Golf series, which is spearheaded by fellow Australian and two-time Open champion Greg Norman, Smith said: “I just won the British Open and you’re asking about that. I think that’s pretty not that good.”

Pressed on whether he was interested in joining, Smith added: “I don’t know mate. My team around me worries about all that stuff. I’m here to win golf tournaments.”

Smith’s one-stroke victory owed as much to his remarkable par save on the 17th as it did to his putting display. The Australian’s approach to the Road Hole, the most difficult on the course for the last three days, finished behind the fearsome bunker. He had no way of going for the flag so putted up around the bowl of the trap to about eight feet and holed for a four. A dropped shot there would have opened the door for the chasing Rory McIlroy.

Look at the state of that back nine 🥵

Smith, starting four shots back, crucially did not drop a shot all day. After just two birdies on the front nine he sprang to life after the turn with a remarkable run of five successive gains – the longest for a player in the final round of the Open in 21 years – which turned the tide in his favour. A birdie at the last realistically took McIlroy’s chances of forcing a play-off out of the Northern Irishman’s hands.

Since records began, McIlroy is the only player to hold the 54-hole lead at a major, hit every green in regulation in the final round and not win.

The 495-yard par-four 17th played as the toughest hole for the third day running, yielding four birdies, with 27 bogeys and 13 double bogeys or worse, resulting in a scoring average of 4.37.

The driveable 570-yard par-five fifth. There were six eagles, 45 birdies and just seven bogeys, for a scoring average of 3.24.