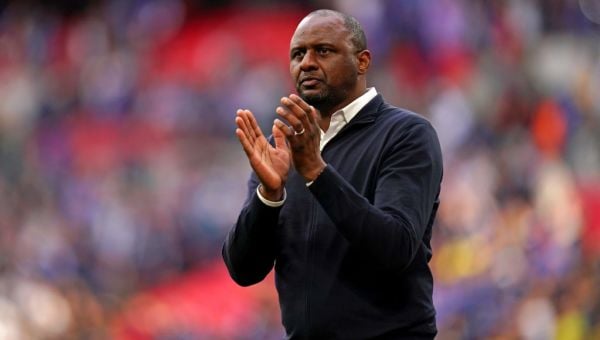 Patrick Vieira admits it is “not ideal” to be preparing for the new season without so many key players but Crystal Palace’s manager is trying to take the positives from his absentee-hit squad’s trip to Australia.

The Eagles enjoyed a promising first season under the France great and opened their pre-season tour with a 2-0 defeat to Premier League giants Liverpool in Singapore.

Palace were without many star names for that friendly, just as they will be for Tuesday’s exhibition clash against Manchester United in front of more than 75,000 fans at the cavernous Melbourne Cricket Ground.

Wilfried Zaha, Marc Guehi and Eberechi Eze are among those to have remained at home, with the club some players were unfit and others “did not meet the entry requirements for Singapore or Australia when travel arrangements were made”.

“I think it’s not the ideal situation for a manager, of course, to have so many players behind,” Palace boss Vieira said.

“But on the other side, we are really pleased as a football club and myself as a manager to be part of that tournament.

“We went to Singapore, we are in Australia today and we look at our squad, we have so many young talents in our football and to have this kind of experience for them I think it’s something unbelievable for them.

“We had some of the young players who never went outside of Europe.

.@CPFC are being put through their paces at their Open Training Session, happening now! pic.twitter.com/RcWKwp8Cbm

Asked if it was embarrassing that some players had to stay behind due to their vaccination status, Vieira said: “I think it’s important to understand that there are players who are staying behind for a different reason.

“Of course we are not going to talk about the private situation of players, if they are vaccinated or not.

“But there are players who stayed behind because they needed to have more training, some of them needed to play more games, more minutes.

“We just try to look at the situation and make the best decision possible for us to be competitive in the first game of the season.”

Proud to be an Eagle 🦅🔴🔵🤝@CPFC pic.twitter.com/0SPs6ldEJP

Among those to remain in the UK was new signing Cheick Doucoure, whose lawyer alleges the midfielder has faced blackmail and attempted extortion following the move from Lens.

“I spoke to him, I spoke to the lawyer as well,” Vieira said. “Of course myself and the club are fully supporting the player.

“That was a strong statement. This is something that him as a player and us as a football club, we don’t accept.”

Doucoure, Sam Johnstone and Malcolm Ebiowei – a player United had targeted – have arrived this summer, but the club’s player of the year Conor Gallagher has departed.

The England international has returned to Chelsea following the end of his loan spell and Vieira does not expect him to return to Selhurst Park.

“At the moment I don’t think there is any chance because he is a Chelsea player,” he added.

“He did fantastically well for us and he’s in the pre-season with Chelsea.

“Honestly, we wish him all the best. I don’t think there is a way to get him back.”