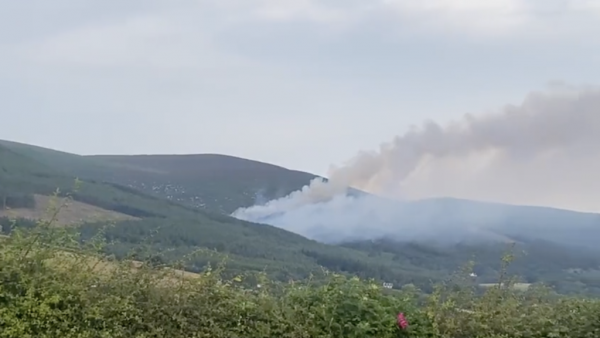 The Wicklow Fire Service is battling a large forest fire in Crone Woods in Enniskerry.

A Status Orange Forest Fire warning is in place as temperatures soar up to 30 degrees across the country.

Fire crews from Bray and Greystones attended the scene around 1am on Monday night and work is ongoing to stop the spread of the fires.

A spokesperson for Coillte said: “The fire is affecting areas of forested lands and also the Wicklow Mountains National Park. An Air Corps helicopter is in attendance to assist in the efforts.

“It is too early to determine the source of ignition of this fire.”

Collite is urging the public to avoid the use of all outdoor fires and other open ignition sources such as barbecues and cigarettes.

“Coillte request that all members of the public and visitors to recreational areas should cooperate with all requests regarding fire safety, obey all relevant bye-laws and be considerate in parking vehicles so as not to impede access by emergency vehicles.

“Forest fires pose a serious health and safety risk to the public and to people working in the forest sector. They are very difficult to control and put firefighters and forest personnel at great risk in their efforts to extinguish them.

“They cause ecological and environmental damage to wildlife and to protected habitats and species that can take years to recover from,” said Coillte.

In the event of a forest fire, Collite are advising the public not to attempt to intervene or fight fires under any circumstances.

The organisation advices people to gather all family/group members and move to a safe fuel-free location such as a car park, upwind of the fire, and telephone Fire and Rescue Services via 112 and report the fire and its location.