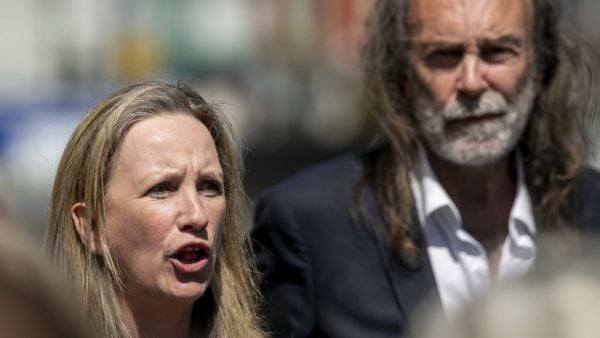 Gemma O’Doherty and John Waters do not have to pay legal fees incurred by the State for defending the duo’s failed challenge against the constitutionality of laws introduced in response to the Covid-19 pandemic.

The Supreme Court ruled on the matter on Tuesday.

Earlier this month the court, on a six to one majority, dismissed Ms O’Doherty and Mr Waters’ appeal against a decision by the High Court, later upheld by the Court of Appeal (CoA), not to grant them permission to bring their action against the measures on the basis it was “misconceived and entirely without merit”.

Following that decision, the State applied for its legal costs, estimated to a six-figure sum, on the basis it had been “entirely successful” in its appeal.

The applicants opposed the application on grounds including that their action was “utterly exceptional” and was one where they had not sought any personal gains.

Mr Waters said that while the applicants “fundamentally disagreed” with the Supreme Court’s decision, it could not be argued that the issues raised were not of fundamental importance.

He added that they had reluctantly brought the proceedings. They had hoped that somebody more legally qualified than them, such as a retired judge, would have stepped forward to bring an action against the measures. However, this did not happen, he said.

Giving the court’s ruling on Tuesday, the Chief Justice Mr Justice Donal O’Donnell said the court had decided to make no order in relation to State’s application that its costs be paid by the applicants.

The Chief Justice also said the court was vacating costs orders made against the applicants by both the High Court and the Court of Appeal, after both those courts dismissed the applicant’s action.

The judge said that in arriving at their ruling, it was taking into account the decisions made against the applicants, the Supreme Court’s own findings, and the manner in which the hearings had been conducted.

The Chief Justice said the courts were places where issues of law must be argued in a professional manner and were not a place where general complaints against bodies such as the media are to be ventilated.

However, the court also had to take into account the nature of the arguments and the fundamentally important issues raised in the case, and the fact the applicants did not seek to make any personal gain from the action.

In relation to the legal costs incurred by the Dáil, Seanad and Ceann Comhairle for being a notice party when the matter was before the High Court and CoA, the Chief Justice suggested that those parties seek a costs order for the proceedings before the CoA only.

Giving the lead judgement, the Chief Justice said the High Court was correct to refuse to grant leave in this case.

He held that, as a general rule, the absence of expert or technical evidence cannot be a basis for the refusal of permission to seek to bring a judicial review action over the validity of legislation.

However, the court held that such evidence is required where the legislation challenged recites circumstances as to why it is deemed necessary.

In the case raised by Ms O’Doherty and Mr Waters, such expert evidence had not been adduced, the court held.

The Supreme Court also rejected contention that there is a burden on the State to justify legislative measures that interfere with constitutional rights.

In a separate decision, Mr Justice Gerard Hogan said he would have allowed the appeal on certain grounds only.

The Supreme Court had agreed to hear Ms O’Doherty and Mr Waters’ appeal on issues concerning the limitations on rights and the proportionality of the measures challenged.

In their judicial review proceedings against the State and the Minister for Health, with the Dáil, Seanad and Ceann Comhairle as notice parties, the applicants sought to have various legislative measures declared unconstitutional and flawed.

The appeal was opposed by the State.

The High Court and the CoA’s findings that the applicants had not produced sufficient evidence to the court to support their arguments and show that their claims were at least arguable were correct, the State argued.

The applicants had argued that the High Court was wrong not to grant them leave. Sufficient evidence had been put before the High Court to show that their claims were arguable, they claimed.

They claimed that the measures, such as the lockdown, brought in over a pandemic they did not believe existed had fundamentally and​ impermissibly breached fundamental constitutional rights that they and other citizens enjoy.

In May 2020, Mr Justice Charles Meenan refused to grant them leave, saying their claims were not arguable. He said they had not provided any expert evidence or facts to support their view the laws were disproportionate or unconstitutional.

Last year, the COA dismissed all grounds of their appeal.

Mr Justice Birmingham said the court was “quite satisfied” that the approach taken by the High Court in relation to their case was correct.

The “controversial and tendentious” case presented no serious legal issue that would justify the granting of permission, the CoA also found.