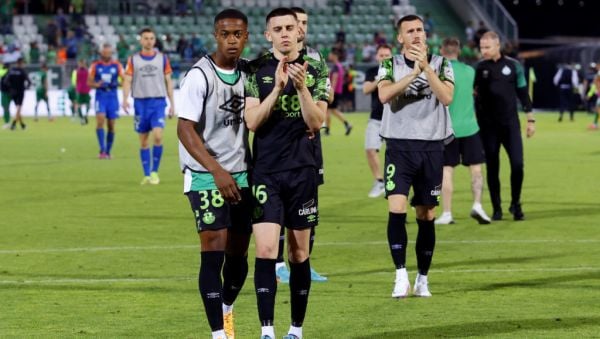 A stoppage-time third goal for Ludogorets in Bulgaria tonight looks to have hurtled Shamrock Rovers out of the Champions League with next week’s second leg to come.

As the Irish Examiner reports, just like 12 months ago, it seemed Rovers would need to reverse a two-goal deficit at home to extend their journey within Europe’s Premier competition into the third round.

They managed to claw that back against Slovan Bratislava, only to bow out with to a late winner, but the extra goal looks in Razgrad to have put the tie beyond Rovers.

Once the Bulgarian champions Ludogorets eased into just their fifth game of the season, they hit Rovers with two goals from Pieros Sotiriou nine minutes apart. As much as the Hoops improved after the break, only substitute Graham Burke succeeded in testing Sergio Padt eight minutes from the finish.

It was the opposite stopper Alan Mannus, who was most worked, however, and he was helpless to prevent substitute Igor Thiago bundling in a third via a deflection following a slack pass out of defence by Lee Grace.

Rovers will give it their utmost before an expected full house at Tallaght next Tuesday, but realistically they are looking at the consolation prize of a Europa League third round meeting against the eliminated side from the Champions League tie between Dinamo Zagreb (Croatia) or Shkupi (North Macedonia) to consume them heading into August.