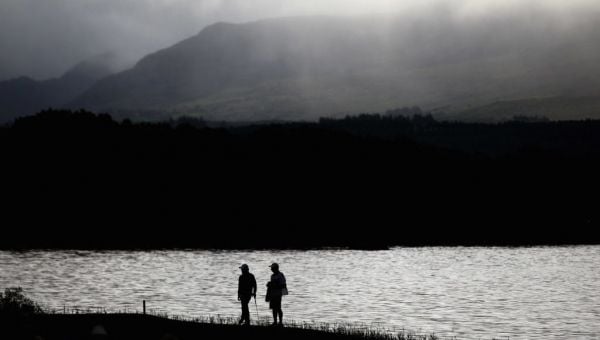 Algal bloom warning signs are being erected on the shore of Killarney’s largest lake, Lough Leane, this morning.

Owners of dogs are warned to keep their pets away from the water, and not to bathe themselves either.

The lake, which is ringed with historic and natural attractions from Ross Castle to O’Sullivan’s Cascade, is popular with anglers and boat users, and is particularly busy with tourists this year.

Blue-green and brown algal scum, caused by the build up of phosphates, was first identified in Lough Leane in the 1980s.

A three-year study began after a serious bloom in 1997 and identified agriculture as the main culprit for the phosphate loading into the lake.

Animal slurry tanks, in particular, were deficient or overloaded. Septic tanks attached to dwellings and businesses were also hugely deficient and were contributing to the enrichment of the lake, it found.

In recent years the toxic algae has been linked to deaths and sickness among dogs, with a major bloom in 2016 said to have caused a number of dog deaths.

Kerry County Council has erected signage at a number of locations along the shore of Lough Leane “to advise members of the public of the potential for an algal bloom in the water and on the shoreline,” it said in a statement.

Samples by Kerry County Council staff in recent days confirmed the presence of cyanobacteria (a blue-green algae) indicating the potential for the formation of algae along the shoreline.

In accordance with protocols for these situations, precautionary signage has been erected at locations along Lough Leane and those who frequent the shoreline are being advised to exercise caution, the council said.

“Members of the public are advised not to bathe in water if there are visible signs of algal blooms in the vicinity. They are also advised to ensure that they keep their dogs under control as such algal accumulations can be harmful on ingestion.”

The situation is being monitored closely on an ongoing basis, the council said.