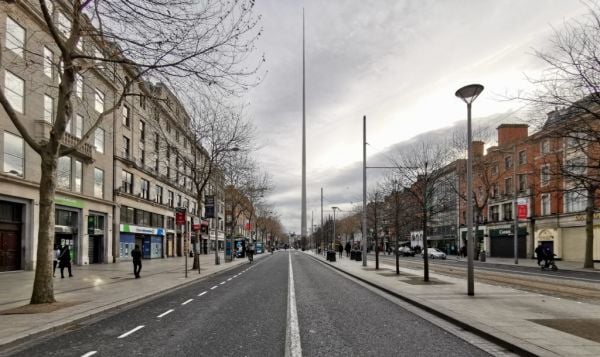 A move has been made to save a hugely popular outdoor social space on Dublin’s O’Connell street earmarked to make way for more budget hotel rooms.

Last month, Dublin City Council granted planning permission to Holiday Inn Express for 95 additional hotel rooms that will result in the loss of a beer garden that serves three pubs -Fibber Magee’s, The Living Room and Murray’s Bar and Restaurant.

The additional 95 hotel rooms is part of a six-storey-high extension that will bring to 309 permitted and existing Holiday Inn Express hotel rooms at the site situated on the corner of O’Connell Street and Cathal Brugha Street.

The Council granted planning permission for the scheme to Findlater House Ltd despite Green Party TD, Neasa Hourigan telling the Council that the loss of cultural space in Dublin city centre in order to provide more hotel rooms is not in keeping with city plans for the area.

Now owners and/or leaseholders of the three businesses, Fibber Magees, The Living Room and Murrays Bar and Restaurant, Noel and Anne Murray have lodged an appeal to An Bord Pleanala against the City Council grant of permission.

An appeal on behalf of the Murrays by O’Neill Town Planning states that the Murrays “are vehemently opposed to the redevelopment of this space for a central city budget hotel” on the site.

The Murray appeal states that the outdoor space has provided a vibrant mixing ground for the three pubs creating a fantastic atmosphere due to the diverse mix of cultures and interests.

The appeals states that a grant of permission for the hotel extension spelling the end of the courtyard would “with one stroke of the pen delete an important hub of cultural activity in the north inner city”.

They say “it would be prudent to refuse planning permission for the proposed development and allow the existing mix of uses continue around the outdoor courtyard”.

The appeal adds the Murrays are concerned that the intensification of hotel rooms by the Holiday Inn Express at the location “would undermine and possibly destroy the diversity and mix of uses presently in the area, and would remove a much used and admired vibrant social gathering area from the heart of the city”.

The appeal contends that “alone, the removal and change of use of this space would destroy this unique facility at a key location in the centre of the city”.

The appeal further contends that an increase in the number of budget holiday bedrooms at this location would be totally at odds with the objective and policies of the City Council to retain the vitality and vibrancy of the area.

It states that the proposed development would be approximately five to six storeys taller that the Murray’s adjoining building and would significantly affect the daylight to the buildings.

The appeal claims that the scheme “must be seen as a gross overdevelopment” of the site.

The city council planner in the case noted the objections concerning the loss of the outdoor seating area which serves the three pubs, the Living Room, Fibber Magees and Murray’s Pub.

The planner states that a number of the submissions refer to the loss of a “unique cultural centre”.

However, the planner stated: “Whilst it is acknowledged that the loss of the outdoor space would be regrettable, the land is within the ownership of the subject site owner, on a lease which is due to expire, and therefore the owner is entitled to cease the use of the area at any time.”

The planner said it is not necessarily considered that the areas which appear to function essentially as a shared Beer Garden “are a hub of cultural activity when compared to the other rich cultural uses the city offers, theatre and arts centres, museums etc and as such there is no objection in principle to the loss of the outdoor areas.”

A decision is due on the appeal in November.