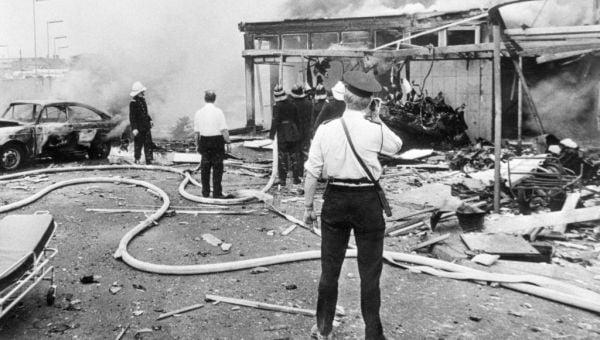 Victims of a series of bombs that exploded across Belfast claiming nine lives in 1972 have been remembered by Boris Johnson during his final Prime Minister Questions.

Speaking on Wednesday – the 40th anniversary of bomb attacks in Regent’s Park and Hyde Park in London – and looking ahead of the 50th anniversary of Bloody Friday on Thursday, Mr Johnson described the actions of the Provisional IRA as “barbaric” and “shameful”, bringing “untold grief to countless families”.

“Our thoughts are with all those that lost loved ones during the Troubles,” he said.

“We as a Government remain determined to build a better, shared future for all the people of Northern Ireland.”

More than 130 people were injured when the Provisional IRA exploded 22 bombs across the city in 80 minutes on July 21st, 1972

A mother of seven, Margaret O’Hare, 34, Brigid Murray, 65, and Stephen Parker, 14, died in a blast close to shops on the Cavehill Road.

The day has become known as Bloody Friday.

On July 20th, 1982, 11 military personnel died in two attacks which occurred within hours of each other in Regent’s Park and Hyde Park in London.

Ulster Unionist leader Doug Beattie described the attacks as “typical of the cruel and barbaric nature of the Provisional IRA, deliberately targeting innocent civilians to instil fear in the population”.

He warned against attempts to “whitewash the crimes of the IRA and rewrite the history of the Troubles”.

“The modern-day Sinn Féin leadership cannot lecture anyone about truth and justice as long as they venerate the perpetrators of crimes such as Bloody Friday, Hyde Park and Regent’s Park, and attempt to justify their actions,” he said.

“The families of the victims of the IRA murdered in those cowardly attacks deserve truth and justice.

“The so-called ‘republican movement’ holds the truth about many murders and maimings including those responsible for Bloody Friday, Hyde Park and Regent’s Park.

Victims of barbaric IRA atrocities on Bloody Friday in Belfast, and in Hyde Park and Regent’s Park in London deserve truth and justice

Doug Beattie MC MLA has paused to remember the victims of the IRA as we approach the 50th anniversary of Bloody Fridayhttps://t.co/KhV9chsDpj pic.twitter.com/aJLndpurj0

“They may want the world to forget about the crimes of the IRA and focus instead on the actions of the security forces, who were battling desperately to prevent even greater loss of life and prevent a full-scale civil war from breaking out, but they will not be allowed to succeed.

“We pause to remember the innocent victims the IRA murdered on Bloody Friday, in Hyde Park and Regent’s Park, as they went about their daily business.”

SDLP South Belfast MLA Matthew O’Toole said it was one of the “darkest days of our troubled past”.

“For the families of those killed and those left with serious and life-changing injuries, the decades since Bloody Friday have been a nightmare,” he said.

“When events like this take place, the real number of victims is immeasurable. The events of that terrible day will have reverberations that have left many people suffering, behind closed doors and unseen.

“While we can rightly be proud of how far we’ve come, Bloody Friday should stand as a reminder that we can never allow ourselves to slip back to the past.

“The events that day were unjustified and unjustifiable, and remain a stain on our history.”

TUV South Belfast spokesperson Andrew Girvin described Bloody Friday as “a reminder of both the brutal legacy of Republican terrorism and true heroism of ordinary people in the face of terrorism”.

He particularly highlighted how Stephen Parker warned others of the bomb he spotted before he died.

“The 14-year-old was posthumously awarded the Queen’s Commendation for Bravery after he tried to warn people about a device he spotted in a car outside a row of shops on Cavehill Road,” he said.

“At a time when there are strenuous attempts to rewrite the past and lionise men of violence it is all the more important that true heroes like Stephen Parker are remembered.”