IT was a day to remember for the Coleman family of Mount Leinster Rangers where Darragh Coleman featured in the exhibition game which took place at half-time of the senior All-Ireland hurling final between Limerick and Kilkenny on Sunday. 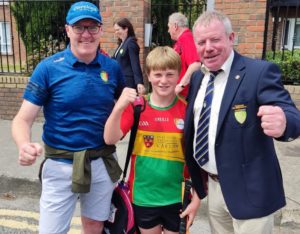 Son of Eamonn and Gerardine, the youngest of four boys underwent Cumann na mBunscol trials earlier in the year.  The family were informed in May that Darragh would be part of a squad of 42 hurlers, camogie players and referees who would feature in the exhibition game.

The event is a joint initiative of the GAA Central Council and the Irish National Teachers Organisation (INTO). Since the games were introduced 35 years ago thousands of young players have progressed through the club and on to their county teams.

When the Coleman family were informed of Darragh’s selection this year, they were not sure whether the exhibition games would take place for a semi-final or in the actual decider. It meant so much more to them that it would be the final itself.

Father, Eamonn, is current chairman of the juvenile section in the Rangers club. Oldest boy in the family, Pauric, is in Canada and has just completed three years in UCD. Eoin was the county minor goalie last year while Conor is on the Celtic Challenge Team.

The parents were given two tickets for the final and Eamonn sought and received tickets for Eoin and Conor. They were based in the Cusack Stand and, as it turned out,  not far from where the young players were based themselves during the senior game.

On Sunday morning, the parents brought the children to the Barbara Ward Clonliffe and Croke Park Community Centre near to the ground. It was the continuation of an amazing experience for all.

“Darragh had a ball. A great day. The players were taken to Croke Park where they were brought into the dressing rooms to get their gear and tog out. They were brought for food after that,” said Eamonn