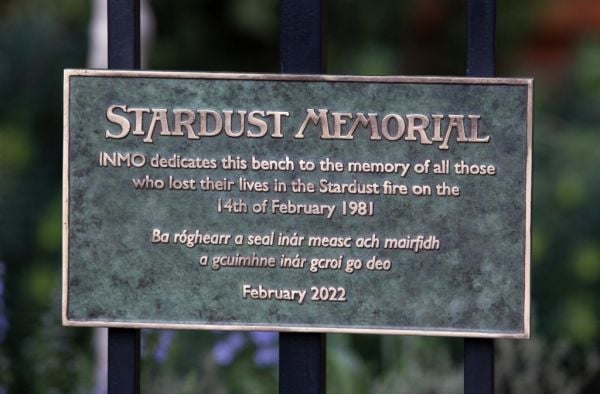 The coroner in the new inquests into the deaths of 48 people in the Stardust Ballroom fire 41 years ago has never suggested a verdict of unlawful killing should or could be returned, the High Court has heard.

Myra Cullinane, the Dublin District Coroner, will simply be investigating the facts surrounding the deaths, and it is open to her to return a range of verdicts, including unlawful killing, her counsel Simon Mills SC told the court on Wednesday.

Mr Mills was making submissions in proceedings brought against the coroner and others by former Stardust manager Eamon Butterly who is seeking to prevent him being made “a target for a verdict of unlawful killing”.

Following the hearing of submissions from all parties, Mr Justice Charles Meenan said he would give his decision as soon as possible given the urgency of the matter.

The coroner opposed the proceedings as did co-respondents, the Minister for Justice and the Attorney General.

The notice parties, which are  the families of 47 deceased represented before the Stardust Inquest, the Garda Commissioner, Dublin City Council and Patricia Kennedy, mother of Marie Kennedy (17) who died in the fire, also opposed the challenge.

Mr Mills said it had been suggested in arguments on behalf of Mr Butterly that the coroner had acceded to suggestions that she should carry out an investigation into unlawful killing.  “That is absolutely incorrect”, he said.

The suggestion of unlawful killing came from lawyers representing the families during a pre-inquest process in which they (lawyers) were not asked to address the verdict but still said it was arguable there was unlawful killing, he said.

Facts of the deaths

While those lawyers were entitled to put their view, the coroner had made no decision “one way or other”, he said.

The coroner’s job is to investigate the facts of the deaths “and that is all she is doing”, he said.

In a ruling she gave following submissions from interested parties, following the pre-inquest process, she had set out her intentions as she is obliged to do, counsel said.

But what Mr Butterly was seeking was that the issue of unlawful killing be taken out, and the jury instructed in that respect.  This would “invert the process” and was not acceptable to the coroner.

In reply to Mr Justice Meenan, who asked if a verdict of unlawful killing contravened the Coroners Act 1962, Mr Mills said it did not once know person was actually identified (as being responsible) in that verdict.

Counsel also said what the Butterly side was inviting the court to conclude was that the Act precludes investigation of unlawful killing.

On any reasonable reading of the Act, that cannot be what it permits but it permits the investigation of certain categories of death, some of which may ultimately be concluded are unlawful or not, he said.

Colm O’hÓisín SC, for the minister and the State, rejected claims by Mr Butterly that his constitutional rights were infringed by the failure by the State to cover his legal costs, as had been provided for the families.

Mr Butterly had legal representation and there was no indication that he will not have “equality of arms” in the inquests, he said.

Seán Guein SC, for the 47 families,  said Mr Butterly cited Article 43.2 in relation to vindication of his right to good name and property, but that same article vindicates the right to life, particularly of those who died of unnatural causes.

This challenge was premature because it was not possible to say an unlawful killing verdict would have consequences for Mr Butterly or others because “it depends on what happens at the inquest” at which there will be an enormous amount of evidence, he said.