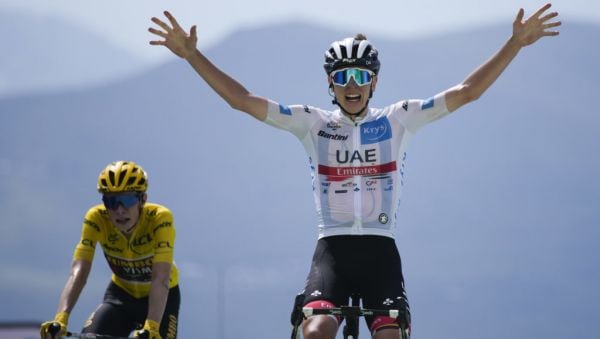 Tadej Pogacar outfought Jonas Vingegaard in an uphill sprint to claim his third stage win of this Tour de France but could not shake the Dane’s grip on yellow as the pair left all other rivals behind on the road to Peyragudes.

It came down to a slow-motion sprint on gradients of up to 16 per cent at the finish, the pair exchanging blows before Pogacar’s landed, but beyond the four extra bonus seconds that came the Slovenian’s way, there was nothing to separate the top two in the general classification.

And with Geraint Thomas losing two minutes after being distanced on the penultimate climb, the Col de Val Louron-Azet, they are surely the only riders still in contention to be wearing yellow in Paris on Sunday.

🥵 A summit battle between 👶 and 💛 saw Slovenian 🇸🇮 @TamauPogi come out on top!

Like everybody else in the peloton, Thomas was unable to live with the pace set by Pogacar’s UAE Team Emirates, who defied their depleted numbers to dictate terms on the second day in the Pyrenees.

After an ill Marc Soler missed the time cut on Tuesday’s stage into Foix, Pogacar woke to news that another key mountain man Rafal Majka was out after tearing a muscle when his chain dramatically snapped late on that stage.

Pogacar was left with only three team-mates but given the struggles of Marc Hirschi in recent days, that was effectively two. However, Mikkel Bjerg and Brandon McNulty would do the work of two men each on the 130km stage from Saint-Gaudens.

Romain Bardet and Ineos Grenadiers pair Dani Martinez and Dylan Van Baarle got into a 17-strong breakaway but their advantage was never more than a couple of minutes, and when Bjerg upped the pace on the Hourquette d’Anzican, it quickly tumbled.

Relentless racing over the first 3 summits of the day, and then Peyragudes 🤯

Bjerg is a time trial specialist but rode some of the world’s best climbers off his wheel as rivals began to fall away.

“I didn’t really expect that,” Thomas said at the finish. “Bjerg put in a hell of a shift for the rider he is. He was cracking me on the climbs. Fair play to them for taking it on.”

The 23-year-old Dane carried a shrinking group of contenders on to the penultimate climb as the escapees were reeled in one by one, then let McNulty pick up the pace to distance Thomas by the summit, with only Vingegaard and Pogacar still with him.

Pogacar waited until the final 300 metres, and the steepest gradients of the altiport’s runway to launch his promised attack.

Vingegaard came back around him with 200 metres to go but it was too soon, and Pogacar’s counter inside the final 100 metres was the one that stuck.

“How the team rode today, we were only four and to take the stage win is already incredible,” said Pogacar, who now has nine Tour stages at the age of 23 – five more than Mark Cavendish had achieved by that age while Eddy Merckx had none.

“We can all be proud because without George (Bennett), without Vegard (Laengen), without Rafal (Majka) and (Marc) Soler we cannot try more.

“(Pogacar) came with some good attacks and I had to be ready and I had to fight,” the Jumbo-Visma rider said. “I’m happy I could stay with him. I think on a finish like this he’s a bit more explosive than I am, I need it to be a bit harder before to make a difference, so I can be happy with how it went.”

Though left behind, Thomas rode smartly to strengthen his grip on third place overall, with Nairo Quintana almost three minutes down.

“I felt alright but I didn’t quite feel as light on the pedals as I have earlier in the race,” the Welshman said.