‘I can’t imagine how scary it must have been’: Girl (7) commended for saving mother’s life 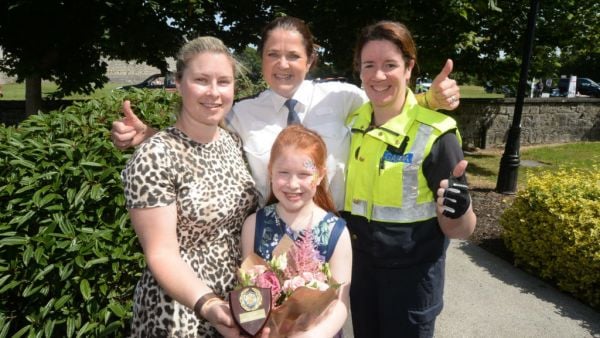 A brave seven-year-old girl has been hailed a hero by gardaí after she saved the life of her mother who suffered a stroke in their home.

After seeing her mother very unwell in her bedroom, Erin O’Mahony knew to get help as soon as she could and managed to find the keys to the front door and let herself out to alert neighbours.

In praising her daughter’s courage, Erin’s mother Dee Dixon from Longwood, Co Meath said not being able to communicate with her terrified daughter was “worse than having a stroke”.

Ms Dixon had only turned 40 when she fell ill after waking up at 7.30am on July 18th last year, when Erin was only six-years-old.

“It was like I stood up too fast after getting out of the bed and I felt really dizzy, so I fell back down. Erin woke up and came looking for me,” she said.

“I could hear her crying beside me but I couldn’t speak to her to reassure her. I couldn’t move my body. If I opened my eyes, the room was spinning. I was falling in and out of consciousness.

“I can’t imagine how scary it must have been for her but hearing her cry and not being able to talk to her was more scary than having a stroke.

“Even though she was traumatised, she knew she had to get the keys, open the front door and get help. Thankfully my neighbour Nuala Brannigan came over straight away, even though Erin and I had been isolating that week as we were close contacts of a Covid-19 case.

“Nuala knew that but came over anyway. You don’t realise until something happens of just how good people are.”

Paramedics administered medication at the scene which minimised the effects of a second stroke Ms Dixon had in the hospital.

Doctors determined that Ms Dixon had an undiagnosed hole in her heart, through which a clot had travelled to her brain and caused the stroke.

“I’m a very positive thinking person so I think I’m blessed that I was diagnosed now when I’m fit and healthy rather than having a stroke in my 60s or 70s when I may not have survived.

“I also realised I was blessed to have such brilliant people around me such as Nuala and my family, as well as the paramedics who helped me and my colleagues and owner of CRL Recruitment Alan Leavy who were there for me in every step of my recovery.

“My little girl was brilliant in knowing to get help and I would urge every parent to have a little chat with their young children on what to do in an emergency.

“I truly believe and know that if Erin did not react the way she did then I would not be here today. No one knows what can happen and it is so important to give our kids the skills they need, in a positive way so that if something does happen they are not scared, they are prepared.”

Erin was presented with a medal and plaque for her bravery by Trim Superintendent Martina Noonan last weekend.

Community Garda Edel Dugdale said Erin “should be very proud of herself and what she has done”.

“She was only six years old and I’m sure she was very upset at seeing her mum so ill, but she didn’t panic and knew she had to seek help. And that’s a really important chat for parents to have with their children in case of any emergency.”

Gda Dugdale added that Erin’s story will be incorporated in future school talks given by local gardaí around staying calm and what steps to take in emergencies.