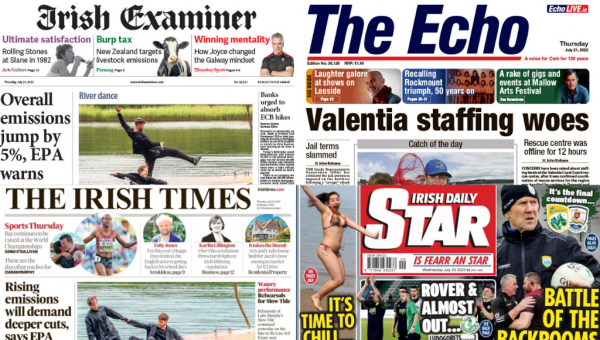 Warnings from the Environmental Protection Agency (EPA), European Central Bank (ECB) interest rates and the Tory leadership race in the UK are all covered in Thursday’s national newspapers.

The Irish Times leads with a report from the EPA, warning that rising emissions will lead to sectors having to make larger reductions in order to meet binding targets.

The paper also reports that just two candidates remain in the running to be the next British prime minister after Penny Mordaunt was eliminated in Wednesday’s vote. 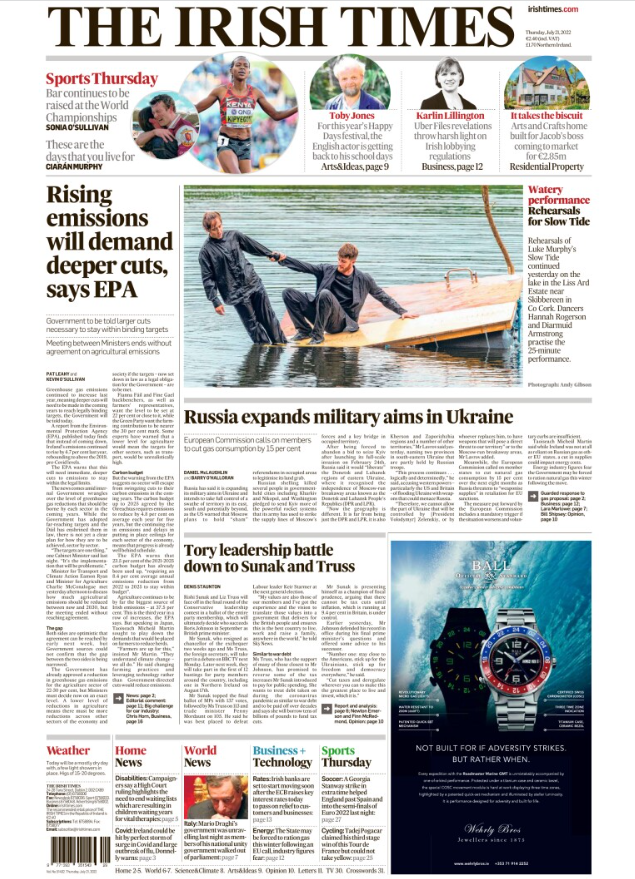 The Echo reads: ‘Valentia staffing woes’, reporting that concerns have been raised over a staff shortage at the Valentia Coast Guard rescue centre after rescue co-ordination for the area was temporarily handed to centres in Dublin and Donegal due to “an unforeseen staff availability issue”. 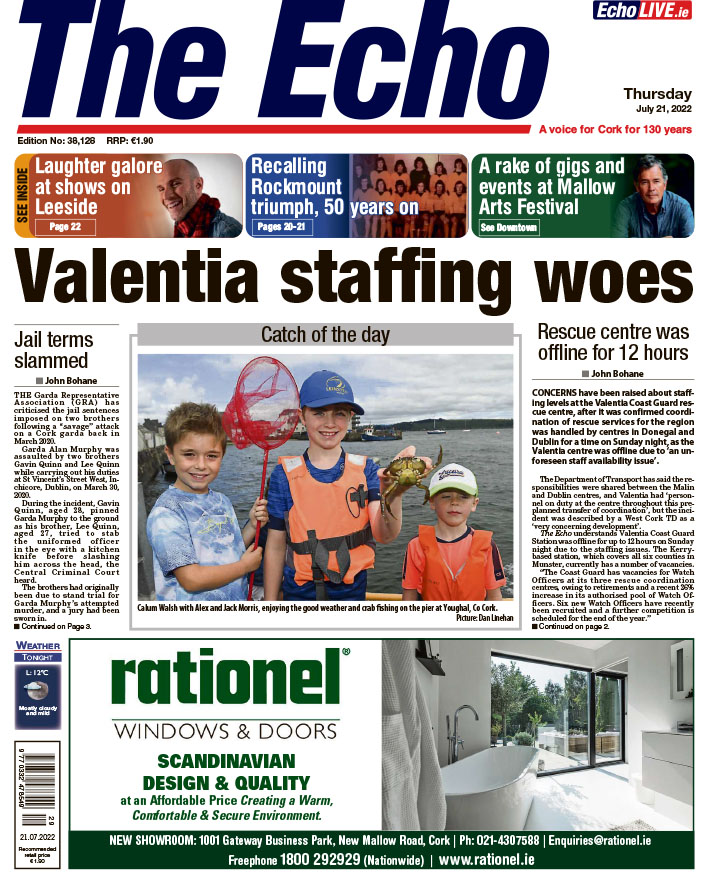 Meanwhile, the Irish Examiner also reports in the EPA’s findings, alongside a piece on the European Central Banks (ECB’s) plans to announce a hike in interest rates on Thursday.

The paper also covers tributes to DCU academic Vicky Conway, whose death was confirmed on Wednesday. 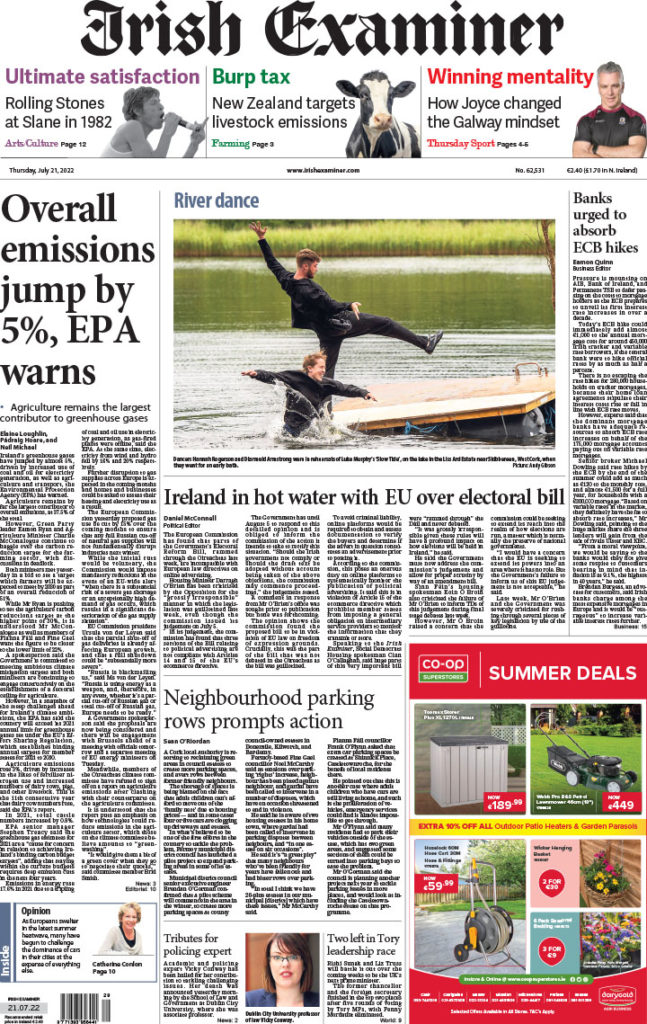 The Irish Daily Mail reports Ireland has been urged to cut gas usage approaching winter, as the European Commission’s president Ursula von der Leyen said Russian president Vladimir Putin is “using energy as a weapon” against Europe over its support of Ukraine.

Is this Putin’s next move in a war that seems to be extending well beyond the borders of Ukraine? For all this and lots more, pick up a copy of Thursday’s Irish Daily Mail or click on https://t.co/7yQSg4uXrF pic.twitter.com/pzTYDrFXhy

The Irish Daily Star has images from Kerry and Galway, as GAA fans there prepare for Sunday’s All-Ireland Senior Football Final.

Also, the paper carries an image of Derry Girls star Nicola Coughlan as her Bridgerton character, Penelope Featherington, after Netflix confirmed filming of the third season has begun.

The Irish Sun leads with an interview from Bonnie Ryan, who says she feared she would also lose her mother following the death of her father, broadcaster Gerry Ryan.

Finally, the Irish Daily Star carries the headline: ‘Case in for mansion…Kinahan’s Big Gaff’. The story follows the High Court’s decision to grant a hearing date for the Criminal Assets Bureau’s application for court orders against Daniel Kinahan and Thomas ‘Bomber’ Kavanagh over plans to seize a luxury mansion in west Dublin.

In Britain, the papers revolve around the results from Tory MPs’ final round of voting which saw Penny Mordaunt eliminated and Rishi Sunak and Liz Truss finishing in the top two places.

“Blue on blue dogfight as Sunak and Truss face off”, The Guardian says as the contest heats up, with a Tory source reportedly telling the paper the battle is about to get even “dirtier”.

The i, Metro, The Daily Telegraph and the Financial Times all write that, according to bookmakers and opinion polls, Ms Truss is the favourite to defeat Mr Sunak, although the latter newspaper notes that the margin is slim.

🔴 Mordaunt loses out to Truss by eight votes in race to be next prime minister
🔴 Foreign secretary now favourite to win in the final ballot against Sunak#TomorrowsPapersToday pic.twitter.com/sIRpQMMpi9

‘Advantage Truss in the race to be PM’#TomorrowsPapersToday

“A fresh start for Britain?” questions The Independent in relation to the two contenders for prime minister.

The Times leads with the former British chancellor going “on the offensive” and claiming that his rival will be unable to beat Sir Keir Starmer at the next election.

The Daily Mirror, meanwhile, summarises the end to Boris Johnson’s reign and the start to another as: “Out of the lying man & into the dire”.

The Daily Mail splash points to an op-ed by Ms Truss in which she again pledges immediate tax cuts.

The Daily Express bids farewell to Mr Johnson, adding that he delivered a “parting shot” to his former number two by hinting that he intends to make a comeback.

Front page: Farewell Boris – parting shot at Rishi and a hint ‘I’ll be back’ #TomorrowsPaperToday

And the Daily Star has the head of Netflix saying that TV “will be dead in 10 years”.