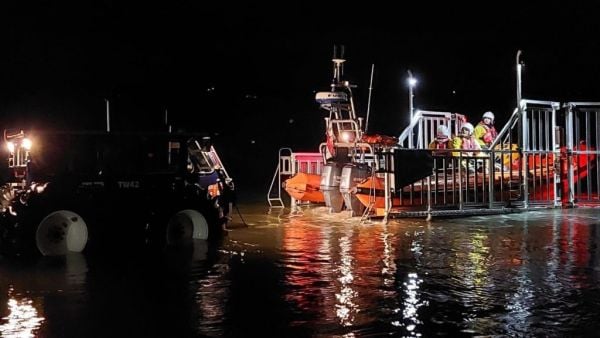 A family of three has been rescued after their yacht lost power and drifted towards the rocks off the coast of Co Cork.

Youghal RNLI volunteer lifeboat rescued the stranded family on Friday morning as the boat drifted towards the rocks near Black Head in Youghal Bay.

The incident was the fifth lifeboat callout this week in Youghal.

A couple with their teenage son radioed for help after their 44ft yacht lost power after a rope became caught in the propeller.

Youghal RNLI Atlantic 85 inshore lifeboat was launched at 6.42am and reached the vessel in 10 minutes.

The family onboard were experienced sailors and have been travelling the world on their yacht for the last 10 years.

Weather conditions were favourable with a falling tide.

Once arriving at scene the crew observed that the family were safe and didn’t require medical attention.

One volunteer crew member boarded the yacht and established a towline between the lifeboat and the vessel.

The lifeboat towed the yacht back to Youghal pontoon where the family were handed into the care of Youghal Coast Guard who were awaiting their arrival.

Mark Nolan,Youghal RNLI Deputy Launching Authority said: “The family had a VH1 radio onboard and didn’t hesitate to call the Coast Guard to alert the lifeboat for assistance when they experienced difficulty.

“This has been a very busy time for us here in Youghal with this being our fifth shout less than a week.

“We would urge people to always carry a means of communion and if they get into difficult to call 999 or 112 and ask for the Coast Guard.”