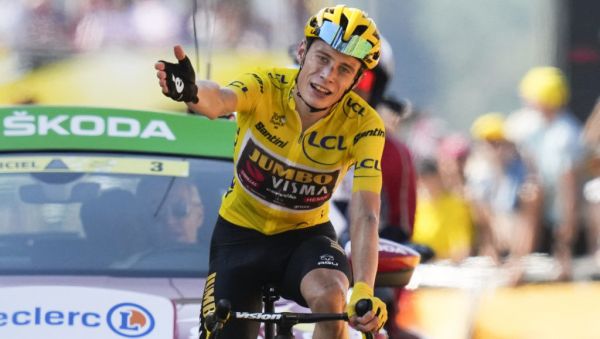 A handshake from Tadej Pogacar to Jonas Vingegaard showed gratitude for a moment of great sportsmanship but could yet double as the defending champion’s concession after Vingegaard moved to the brink of Tour de France glory on Thursday.

The pace set by Vingegaard’s outstanding team-mate Wout Van Aert proved too much for Pogacar in the last four kilometres of the Tour’s final mountain stage, allowing Vingegaard to ride away to his second stage win and first in the yellow jersey.

Putting more than a minute into Pogacar by the summit of the Hautacam, the Jumbo-Visma rider stretched his lead to three minutes 26 seconds, with Saturday’s time trial expected to be the last real chance to create significant time gaps.

💪 A monstrous effort from Jonas Vingegaard

Pogacar knew he needed to put the pressure on during this 143km stage from Lourdes, and looked to the tight, twisty descent off the penultimate climb, the Col de Spandelles, to do it.

It looked like working – Vingegaard almost lost control on a left-hander before rebalancing – but moments later it was Pogacar who went wide. With his tyres in the gravel, Pogacar slipped and went down.

Rather than push on, Vingegaard waited for Pogacar to recover, and accepted the outstretched hand from the UAE Team Emirates rider as he drew up alongside.

Pogacar was urged to attack again by his team director but the Slovenian shook his head and, hobbled with blood running from the back of his left thigh, he would be left behind on the climb to the finish.

“There couldn’t be a better way to lose the Tour de France than this,” the 23-year-old said. “I gave it all today thinking of the GC. I will leave the race with no regrets…

“I have nothing but respect to Jonas Vingegaard. I think we respect each other a lot…It was fine for him to wait. It’s me who wanted to go fast on the descent, but I pushed it too far and crashed – can’t blame anyone for that.”

That it was Van Aert setting the pace as Pogacar dropped back underlined another remarkable day for Jumbo-Visma, who are bidding to become the first team since Team Telekom in 1997 to win both the yellow and green jerseys in a single Tour, and now stand to add the polka dots too.

😱 @TamauPogi crashed! But Jonas Vingegaard waits for him.

Van Aert, already mathematically assured of winning the points classification if he reaches Paris, attacked from the flag, won the intermediate sprint, led the remnants of a breakaway on to the final climb and then took over the pacing for Vingegaard with five kilometres to go.

If he had won the stage Van Aert would have become the leader of the mountains classification too, but that honour instead belongs to Vingegaard.

“It’s incredible,” the Dane said. “I said this morning to my girlfriend and my daughter I wanted to win for them and I did. This one is for my two girls at home.

“I think (Pogacar) missed a corner and then he went into some gravel, he tried to steer it out and the bike disappeared under him. Then I waited for him.

With 8km to go, the top 3 riders in the overall standings were together. Then, the brutal ascent opened major gaps

“Today I have to thank all my team-mates. They were incredible. You see Van Aert dropping Pogacar at the end. Sepp Kuss was incredible, Tiesj (Benoot), Christophe (Laporte) and Nathan (Van Hooydonck), they were all incredible today. I couldn’t have done it without them.”

Geraint Thomas had briefly gone past Vingegaard and Pogacar on the way up the Spandelles as they looked at each other, but was distanced by the front two for a second time on the final climb. He then needed a bike change after a puncture, but took fourth on the day to strengthen his grip on third overall.

“I was going through highs and lows today,” the Welshman said. “When they were kicking off I was just riding my own pace, that’s why I went past those boys. I’d had enough of those attacks they were doing.

“We still have tomorrow. It could be crosswinds all day. Nothing is straightforward in this race but then there’s the time trial, I’ll try and recover and get ready for that. It’s all good preparation for the Commonwealth Games.”