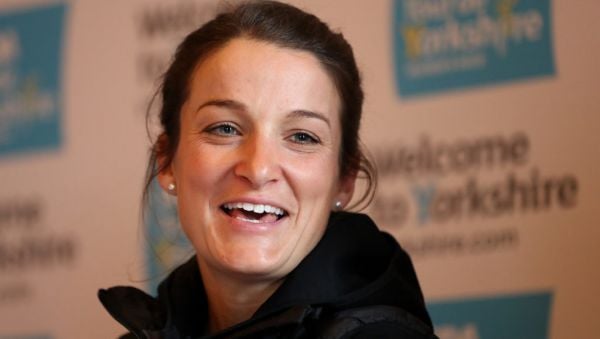 The first proper women’s Tour de France, an eight-day race which will conclude on La Super Planche des Belles Filles on July 31st, will begin in Paris this Sunday, a few hours before the men’s race rolls into town.

Since 2014, the Amaury Sports Organisation who run the Tour had staged La Course, a one or two-day race which Deignan won in 2020, but the event attracted much criticism for being “tokenistic”.

The fact demands for a proper event have finally been answered is, Deignan believes, representative of broader changes.

“I think we’re at a turning point in society in terms of women’s equality,” Deignan told the PA news agency. “There’s a continuous fight that will never stop but I think the age of social media has made people more accountable.

“People are able to call out inequalities more easily so women have got more of their own voice to be able to challenge things.

“Whenever a race has been badly organised or not at all, there has been a backlash.”

💛 The first @SANTINI_SMS Yellow Jersey of the Tour de France Femmes deserves the most prestigious finish in cycling history. See you on the Champs-Elysées on Sunday!#WatchTheFemmes pic.twitter.com/9FPTloWVii

The fight for yellow will come down to the final weekend in the mountains but before then riders will tackle gravel on stage four, and a 176km long stage five from Bar-le-Duc to Saint-die-des-Vosges which is the longest day to ever feature in the Women’s WorldTour.

There is a certain irony that it begins with an 82km sprint along the Champs-Elysees, a throwback to the worst of La Course in 2014, but it will allow the race to begin under the eyes of the world’s media.

Deignan will not be on the start-line herself as she is expecting her second child later this year, though after working as a commentator during the men’s Tour this year, she recognises the opportunity that will be.

“It’s massive,” she said. “Coming to the men’s Tour has given me an appreciation of just how big the infrastructure and the logistics and the media is, how big and global it all is. I knew it was a big race but until I’ve been here in person I didn’t realise how big.

“For the women it will be the biggest we’ve ever had and that’s hugely important for the exposure and the sponsors and the investment, the whole business side.

“But it’s also for the athletes, to be able to say they’ve ridden the Tour de France. It’s something everybody asks you as a pro cyclist and until now they haven’t been able to say that.”

The list of riders heading to Paris is headed by presumptive favourite Annemiek van Vleuten, the 2019 world champion who earlier this month sealed her third Giro Donne title.

Deignan cannot argue with the bookies, but the Trek-Segafredo rider expects to see her team-mate Elisa Longo Borghini be among those to challenge.

Nice to catch up with my former teammate @DarioCataldo Great person on and off the bike. Had to wake up my legs a bit today with some hard all out efforts. Has been a good decision to come back after the @GiroItaliaDonne I am recovered, recharged and ready for @LeTourFemmes 😎💪 pic.twitter.com/8tqoTzPMGn

“Van Vleuten was dominant (in the Giro) but at the same time the gaps were a bit closer than we were anticipating so she really needs to make sure she makes no mistakes in the opening stages,” Deignan said.

“Elisa took the Giro quite easy, she didn’t over-exert herself and was looking ahead to the Tour. Elisa is someone who can take advantage of those early Classic-like stages, particularly with the gravel on stage four, and put time into somebody like Van Vleuten.

“Van Vleuten is the purest climber so it’s about her limiting her losses in the first few days and others taking as much advantage as they can.”

:: Lizzie Deignan is an ambassador for cycle insurance provider Cycleplan. Protect your bike with a 30 per cent discount by visiting cycleplan.co.uk