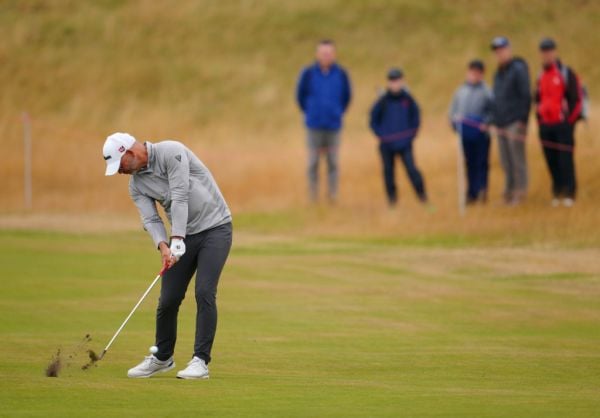 Paul Waring maintained his grip at the top of the Cazoo Classic leaderboard, closing out round two with a two-stroke lead in Southport.

The Englishman, who tied the course record with a nine-under 63 in round one, carded 70 on a second day of play that saw the entire field challenged by a dramatic shift in wind direction at Hillside.

Waring opened his afternoon with a bogey on the 10th which he quickly balanced out with a birdie from six feet on the par-four 12th, one of five on the day for the Wirral native who also bogeyed twice more before finishing the day on 11 under par for the tournament.

“[It was a] very different golf course today,” Waring said.

A round of 70 for the overnight leader ✍️ @PaulWaringGolf currently remains at the top.#CazooClassic pic.twitter.com/Ba4BNyG2xa

“Completely different wind direction which made it a bit more tricky visually. Today it was a bit more fiddly for me especially hitting a draw as it was hard to get a start line correct, which is where I struggled at times.”

Waring, who entered the tournament ranked 151st on the tour and looking for his first win since the 2018 Nordea Masters, insisted he is not thinking too far ahead with two days still to play.

He said: “I know it’s so cliche but just trying to take it one shot at a time and seeing where the ball ends up, and then try go and play again. I have been trying to work at that so hard over the last few months, it’s amazing how quickly you can get too far ahead of yourself, so it is something that is definitely at the forefront of my mind.”

Scotland’s Grant Forrest is one of three men heading into the weekend in joint second place on nine under, alongside Frenchman Julien Guerrier and Sweden’s Jens Dantorp, with all three players following up their opening-day 66s with rounds of 69.

Guerrier also pointed to the change of conditions as an added challenge.

He said: “The links course is very interesting when you have different winds and we have to adapt and still have a good strategy. We didn’t know whether the forecast would be blowing or rain, or both.”

England’s Garrick Porteous, meanwhile, dropped four places from his second-place finish on Thursday, double-bogeying the four-par third to finish at par on 72.

That left him in joint sixth place on seven under with compatriot Callum Shinkwin and Finn Sami Valimaki, whose excellent afternoon saw him climb 35 places and sink an eagle on the five-par 11th.