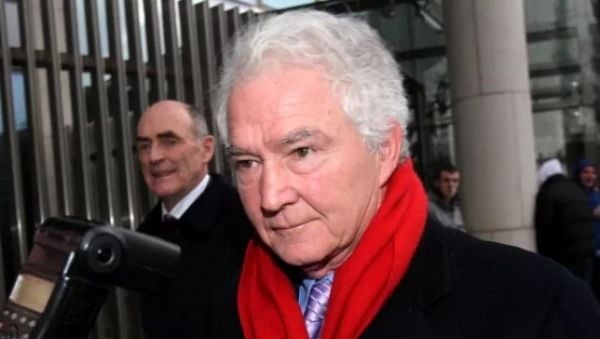 An Bord Pleanála has refused planning permission to plans by the late and former Anglo-Irish Bank chairman Sean Fitzpatrick for a “modest” two-storey four-bedroom house on a site outside Greystones, Co Wicklow.

The decision by the appeals board upholds a planning refusal by Wicklow County Council last September for the plans lodged by Mr Fitzpatrick and his wife, Caitriona Fitzpatrick.

The Fitzpatricks last year appealed the planning refusal and Mr Fitzpatrick (73) died of cardiac arrest last November while the appeal was before the board.

The ruling by the appeals board follows the board previously granting planning permission in December 2020 for a four bedroomed house application by the Fitzpatricks on an adjoining site which lies close to Greystones Golf club.

The planned new Fitzpatrick house at Meadow Garden, Farm Lane in the Old Burnaby area of Greystones, was to be located within the Burnaby Architectural Conservation Area (BACA), an historic suburb developed at the turn of the 19th and 20th centuries.

In its reason for refusal, the appeals board stated that the BACA “is considered to be of national interest” and the proposed development due to the repeat house design adopted “undermines the character and adversely affects the setting of the BACA”.

As part of a 14-page appeal against the Council decision, planning consultant, Kevin Hughes described a Council refusal reason concerning the planned dwelling “to be entirely disingenuous and wholly at odds with national planning policy.”

In the formal appeal against the Council’s refusal, Mr Hughes described the planned Fitzpatrick four bedroomed house as “a high quality and modest addition to the immediate area”.

The board appeals inspector in the case, Mary MacMahon said that the site is located to the rear of the permitted Fitzpatrick dwelling house and is some 1.3 metres higher.

Ms MacMahon concluded that the design of the proposed development is very similar in nature to the permitted dwelling.

She stated: “While the design has been previously permitted, I do not consider its repetition the correct design approach in the Burnaby ACA.”

Ms MacMahon stated: “Given the national importance of the Burnaby ACA, any new development must be of a very high standard. The repetition of the design diminishes the quality and character of the ACA in this area and permission should be refused on this basis.”

In its original objection against the Fitzpatrick proposal, chairman of the Burnaby Residents Association, Liam Sweeney told the Council that the proposed development “would be out of character with the existing pattern of the area and would represent a crammed form of development”.

Mr Sweeney stated that the scheme would seriously injure the amenities of the area.

Referring to the permission for the other house at the site, Mr Sweeney told the council that “the manner in which the site is being sequentially carved up for development leaves concerns that additional housing units may be proposed on what remains a cramped and inaccessible site”.

Mr Sweeney stated that “the Association is keen to ensure that the essential character of the Burnaby Estate is preserved and in particular not eroded or undermined by incremental development and depletion of the original built fabric and surrounding curtilage”.

Mr Fitzpatrick lost control of the Meadow Garden site when he was declared a bankrupt in 2010 with debts of €147 million.

Mr Fitzpatrick was discharged from bankruptcy in 2014 and Caitriona Fitzpatrick bought back the Meadow Garden site in 2017 from her husband’s bankruptcy trustee.

In May 2017 Mr Fitzpatrick was acquitted on criminal counts of allegedly misleading Anglo’s auditors about tens of millions of Euro in loans concealed from the public between 2002 and 2007.

Mr Fitzpatrick resigned as chairman of the bank in December 2008, almost a month before it was nationalised, after the true extent of his loans, amounting to around €122 million, were disclosed by the bank.