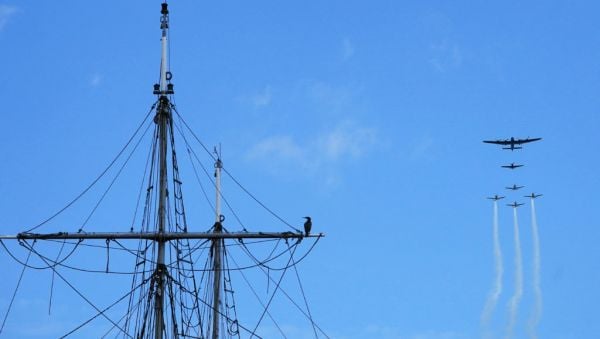 Two of the Royal Air Force’s Second World War planes have flown over Dublin as part of a Veterans’ Day event for the Irish Air Corps.

The guest of honour at the event was retired Group Captain John ‘Paddy’ Hemingway, the last known pilot who took part in the Battle of France and Battle of Britain and who was shot down five times.

The Avro Lancaster and a Hawker Hurricane flew in formation west down the Liffey before landing at the Casement Aerodrome.

Mr Hemingway was brought out to the two planes after they landed.

It is understood this was the first time the Lancaster plane had landed in Dublin since the Second World War.

Wonderful scenes at @IrishAirCorps Baldonnel as 103 year old Battle of Britain pilot Group Captain John ‘Paddy’ Hemingway DFC dons his uniform to welcome @RAFBBMF and his beloved Hurricane. Not many dry eyes on this occasion.@RoyalAirForce pic.twitter.com/LwaWKus2PF

Speaking to the PA news agency, Captain Paul McDermott, 2022 leader of The Silver Swallows, said that it was “a momentous occasion for me, for our team and for the Irish Air Corps”.

“It’s not every day that you get to fly in formation with a series of World War Two aircrafts.

“It was a bit surreal, I still can’t believe that we got to do it.”

RAF Warrant Officer Jake Alpert said it was a “significant day” for the Royal Air Force.

“When I look at [Mr Hemingway’s] career, I absolutely inspire to be like a person of that sort, especially somebody who has been shot down five times, and to come back for more which is absolutely incredible.”

Retired captain Chris Carey, who was the second ever Irish Air Corps helicopter pilot, said it was a wonderful day.

He added: “It is absolutely wonderful to be here today, to watch this man being honoured, and to see these beautiful aeroplanes flying.

“The crowd really rose to the occasion and gave him a wonderful ovation.”

The Chief of Staff of the Irish Defence Forces, Lieutenant General Sean Clancy and Chief of Air Staff Royal Air Force, Air Chief Marshal Sir Mike Wigston was in attendance at the event.

The event was also held to welcome the return of the Bray Air Display this weekend after the Covid-19 pandemic.

It comes after a ceremony was held earlier this year to mark 100 years since the foundation of the Irish Air Corps, in which Minister for Foreign Affairs and Defence Simon Coveney was in attendance.

The ceremony heard how the services of the Irish Air Corps were called on during the Covid-19 pandemic, with staff delivering vaccines to the islands off the coast of Ireland and offering support to the HSE.