Vivianne Miedema could be back for Netherlands in France quarter-final 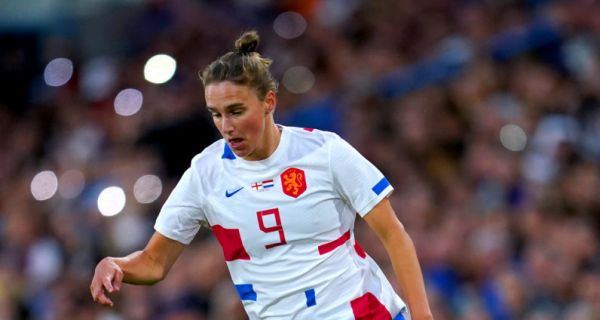 Arsenal striker Miedema, who is her country’s record scorer with 94 goals in 112 caps, missed the group-stage wins over Portugal and Switzerland following a positive Covid-19 test.

The 26-year-old has returned to training ahead of the last-eight showdown in Rotherham and will continue to be assessed.

English boss Parsons provided an optimistic update but was reluctant to be drawn on whether Miedema will be able to start for the defending champions.

“I said the other day, we need to get through three training sessions,” he told a press conference ahead of training on Friday.

“We’ve got through two, things are going well. We have one more today. I’m spreading as much positive energy and optimism as possible, but we have to see.

“We’ll make the decision before our final meeting, but it’s also about making sure every step is ticked because with Covid with players it’s never the same.

“There is a chance she could be available because things are going well, but we need to tick these last few boxes.

“The only thing I am interested in is ‘is she available to play?’. Of course there is a conversation about minutes, but that’s the first step. And from there we need to make tactical choices.”

The victors at New York Stadium will progress to a semi-final showdown with Germany in Milton Keynes.

Parsons believes his team have improved since a 3-1 friendly defeat to France in February and is confident his players will rise to the occasion.

“We’ve taken steps forward on the pitch, but we want to take more steps on the pitch,” he said. “This team steps up to the size of the occasion more than any team I’ve ever worked with.

“I feel less stressed and less worried when it’s a big occasion and big opponent.

“Tomorrow my confidence in players giving everything they have is very high. It’s a game that I think world football is looking forward to, these two great teams.”

France are bidding to reach the semi-finals for the first time after topping Group D following victories over Italy and Belgium and a draw with Iceland.

“We know the Netherlands very well; we’ve watched them and we know their players – the starters and the substitutes,” she said.

“There are no surprises, and there won’t be any for them either.

“The Netherlands are the holders, and if either of us are favourites it should be them. As everyone keeps telling us: we’ve never been past the quarter-finals so we can hardly be favourites.”

France captain Wendie Renard was unsurprised that the availability of Miedema was not being made public by the Dutch.

“Together, we are going to try to rewrite history,” said the defender. “We need to pull out all the stops and focus from first minute to the last.

“Miedema is a very competitive player and she’ll want to play. She is a world-class player with the ability to hold the ball as well as take out an entire team.

“It’s normal for a coach to want to keep that (her condition) secret.”