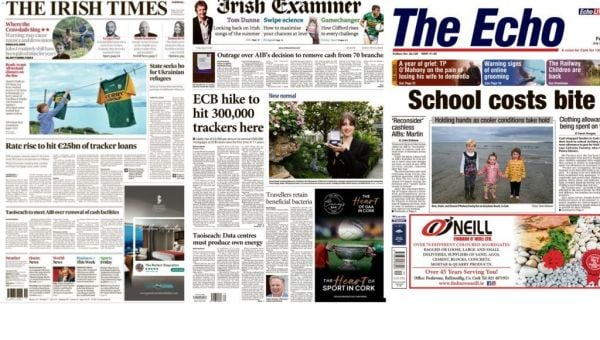 Friday’s front pages focus on the fallout from AIB’s decision to go cashless at 70 branches as well as the European Central Banks decision to raise interest rates for the first time since 2011 and the impact it will have on tracker mortgages.

The Irish Times and Irish Examiner lead on the ECB’s interest rate hikes and the impact it will have on around 300,000 people on tracker mortgages. 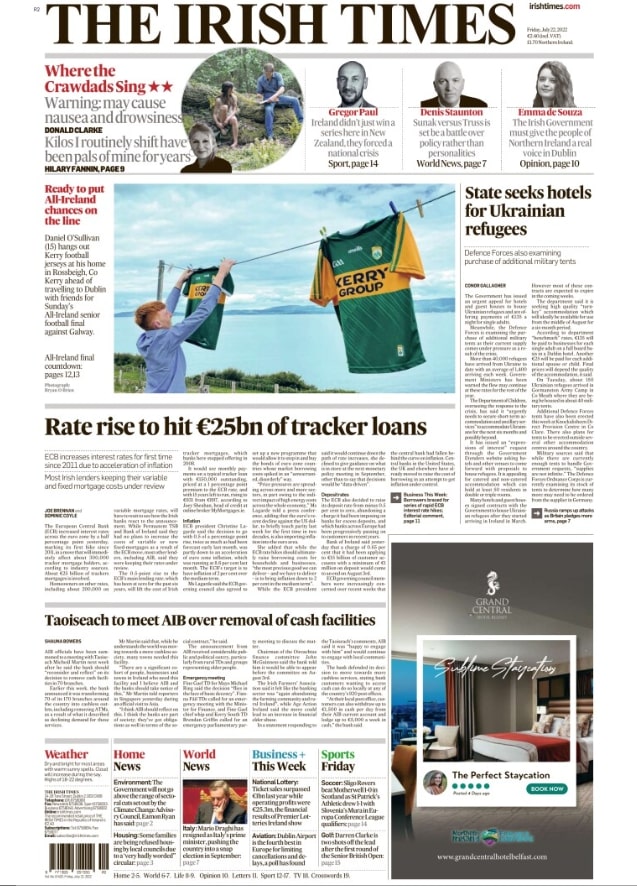 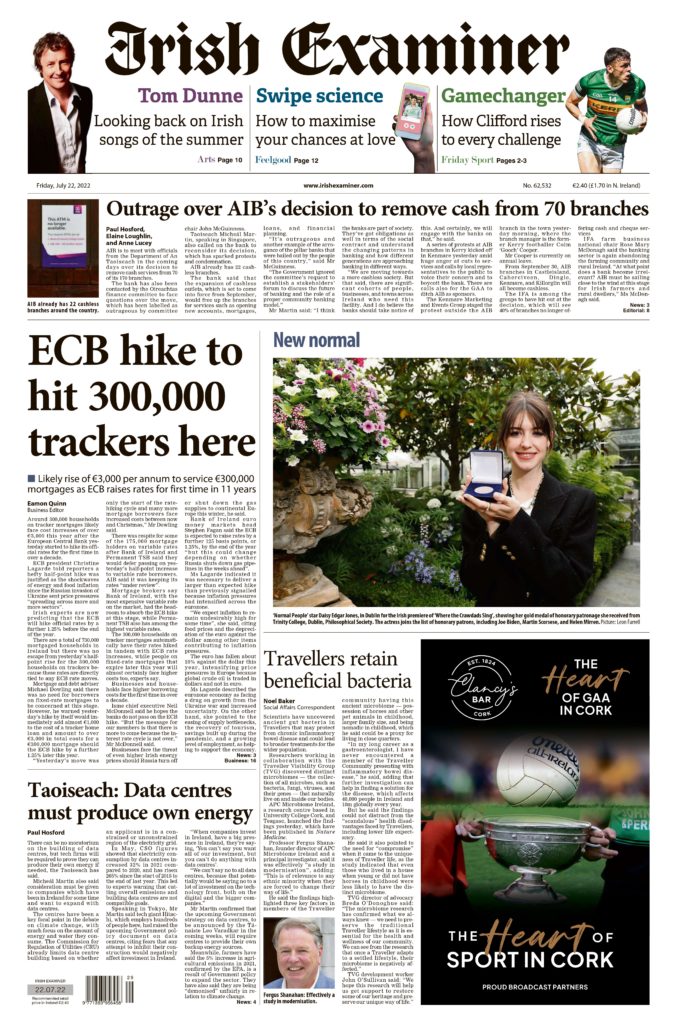 The Echo focus on families using their back-to-school clothing and footwear allowance on food and fuel as inflation continues to bite. 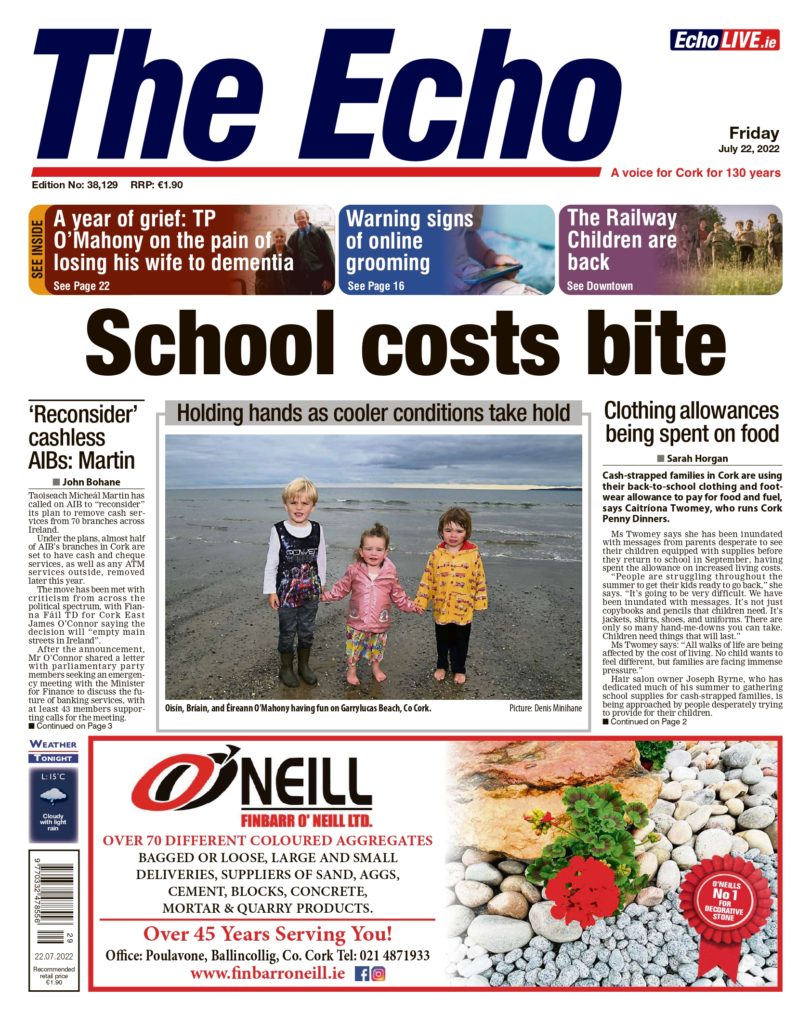 The Irish Daily Mail also focus on the interest rates increase and the effect it will have on customers.

Next painful hit to our pockets comes from the banks and mortgage lenders…
For all this and lots more, pick up a copy of Friday’s Irish Daily Mail, or click on https://t.co/7yQSg4dmA7 pic.twitter.com/2M6VFzuA2Y

The Belfast Telegraph lead with a piece about a man charged with murdering a father of five in Portrush revealing he planned to kill someone.

Morning readers. Stay with @BelTel for all your breaking news. Here’s a look at the front page of the Belfast Telegraph this morning. To read the full newspaper on your device, go Premium + ➡️ https://t.co/WfXEtzkTSl pic.twitter.com/XHIk0t2vCi

Meanwhle in the UK, the papers are led by further escalations in the battle to be the new Prime Minister and High Court revelations that the BBC “fabricated” affair allegations about the Duke of Cambridge’s former nanny in a bid to procure an exclusive interview with Diana, Princess of Wales.

The Daily Express, Metro and the Daily Star all react to the court case which saw the BBC paying substantial damages to the former nanny with headlines that have the national broadcaster saying: “We let Diana down.”

BBC: WE LET DIANA DOWN

🔴 Charles nanny affair faked to get TV interview
🔴 Could it really be coming home for England?#TomorrowsPapersToday pic.twitter.com/dosfxIKX2Y

The Daily Mirror adds that Diana’s brother has pled for police to now charge those responsible for the BBC’s “shameful interview” tactics.

Elsewhere, The Guardian, The Daily Telegraph and The Times report the final two vying to be the next UK prime minister have “traded blows” over tax plans with Rishi Sunak warning against a “huge borrowing spree” as Liz Truss defended tax-cutting plans worth at least £30 billion (€35 billion) a year.

‘No tax cuts until late next year, says Sunak’#TomorrowsPapersToday

The Independent adds that Ms Truss’s £30bn tax-slashing plans have been “savaged” by economists, with one unnamed economics professor telling the paper her claim the policy would tame soaring inflation is “ridiculous”.

The i, meanwhile, says Penny Mordaunt’s supporters are orchestrating a “stop Liz Truss” campaign to ensure the bookies’ favourite does not win the race to become UK prime minister.

Elsewhere, the Daily Mail carries a report authored by David Neal, the UK chief borders inspector, claiming Channel migrants who triggered alerts on security databases have been allowed to vanish.

The group running the UK’s largest steel plant has threatened to close if the UK Government does not provide it with help to curb emissions, the Financial Times says.

And The Sun splash writes that EastEnders have signed Jade Goody’s son Bobby Brazier as a cast member.