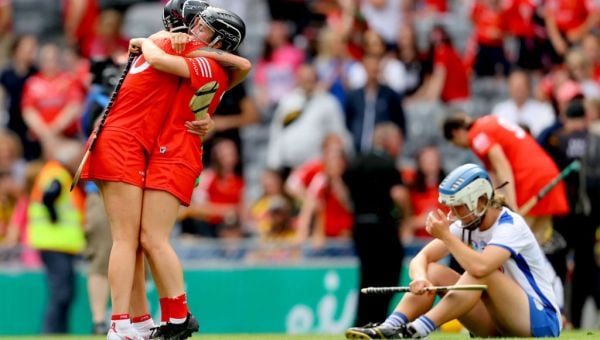 While it was a relief for Matthew Twomey and his troops that they were able to hit top gear with the last eight points, Derek Lyons and his crew will feel that the final scoreline was scant reflection of their efforts and they will be correct in that assessment.

The game didn’t swing on the availability of Ashling Thompson after the success of her morning appeal against a two-match suspension but it was a huge factor, the Milford powerhouse having a huge impact in terms of breaking up play, doing her best Will O’Donoghue impression around the rucks and her intelligent distribution. 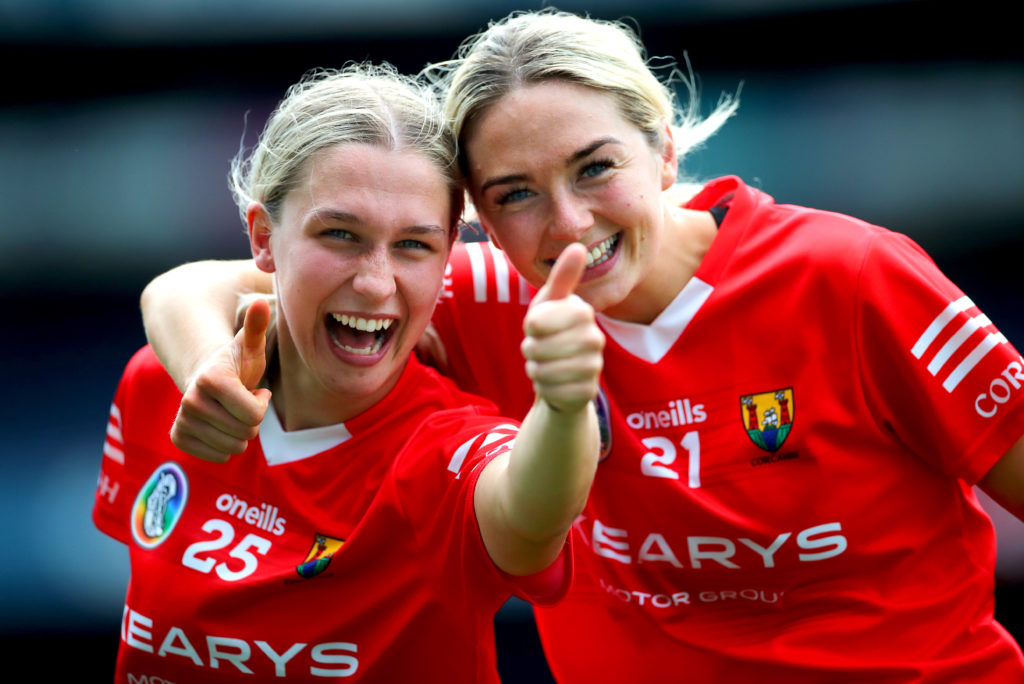 With Libby Coppinger a resolute presence at full-back, Hannah Looney and former Down star Sorcha McCartan storming into it in the final quarter and Amy O’Connor slotting her placed ball opportunities, Cork just had a little too much for their gallant opponents up the finishing straight.

It was a tactically intriguing affair, with Cork’s forwards lining up in a bunch on the 65 for the throw-in and then settling into three up the spine, usually with Iona Heffernan picking up McCartan (daughter of All-Ireland football winner Greg), Keely Corbett-Barry tagging Katrina Mackey and Mairéad Power marking O’Connor.

Both 6s, Clodagh Carroll for Waterford and Laura Treacy for Cork were the plus ones in defence, sweeping and taking short puckouts.

One of the big match-ups saw Katie O’Mahony shadowing up Beth Carton and it was a battle that the second leading scorer in the championship won from the throw-in until O’Mahony’s withdrawal in the 22nd minute. 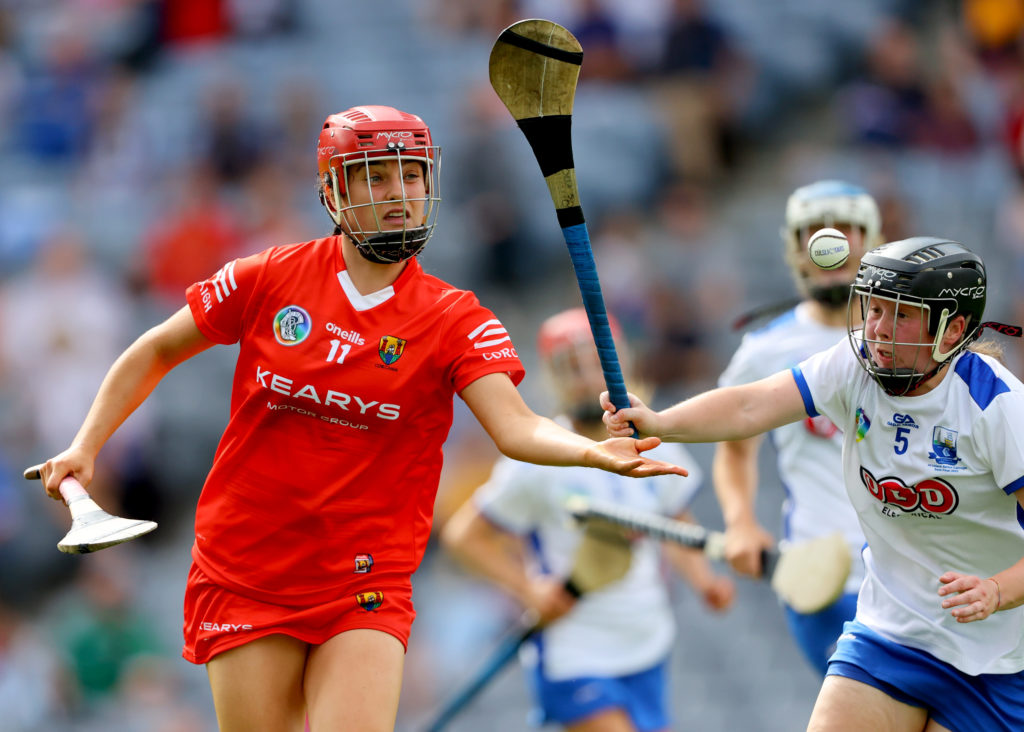 By that juncture, Carton had three points on the board, two from play, and the free won for forcing O’Mahony to overcarry, though the suspicion was that she may have fouled the Inniscarra player in doing so on that occasion.

It was symptomatic of Waterford’s work rate however, and it completely knocked Cork out of their comfort zone.

Thompson came on for O’Mahony and quickly moved into the role as spare defender, with Treacy picking up Carton.

Cork, having shot five wides from largely low-percentage shots and failed to provide O’Connor and O’Mackey in particular with any quality of ball due to the pressure being exerted further out – though Corbett-Barry and O’Brien were very sticky too whenever the ball did come in – finally got off the mark through a lovely score from Mackey in the 25th minute, and McCartan split the posts three minutes later.

When Chloe Sigerson lofted over a free from the 65, tight to the right touchline, there were incredibly only two points between them. Earlier, Róisín Kirwan had shot inches over the crossbar when put through by Abby Flynn with the goal on, though Amy Lee’s dash from the line deserves credit for rushing the shot.

Waterford’s response was good though, Flynn and Rockett with a sensational score making it 0-7 to 0-3 at the break, the very least Waterford’s dominance deserved. 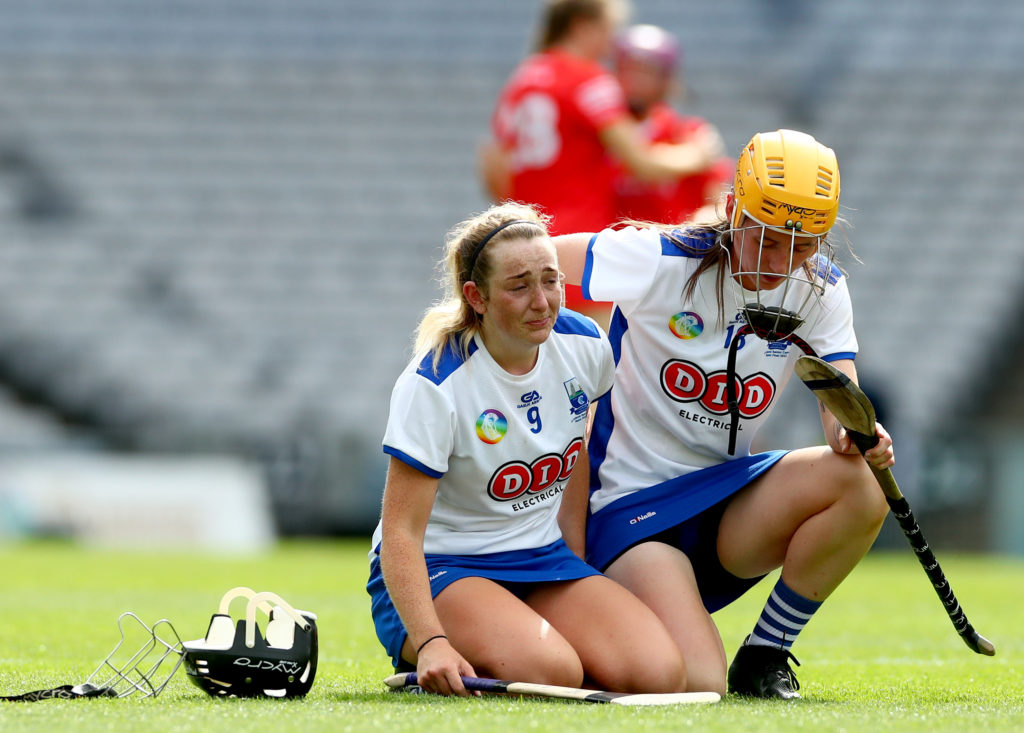 Rockett clipped over another less than two minutes after the restart but Cork shot four of the next five points through Mackey, Clíona Healy, O’Connor and Fiona Keating, the latter after a brilliant turnover at the other end of the field by Thompson on Bray, when a point looked on for Waterford.

Rockett fed Bray to make it a three-point game in the 46th minute but with Carton’s influence reduced greatly, Cork found another gear, with the spaces opening up and confidence growing.

O’Connor hit three on the trot to bring the sides level, the second of those came from a 45 after Brianna O’Regan made a brilliant double save from sub Emma Murphy. Murphy gave Cork the lead with a super score.

Cork were playing with more energy now as Waterford tired, and winning more 50-50s as a result. They were also finding more space in the Déise half and McCartan (two), O’Connor and Keating completed the scoring.