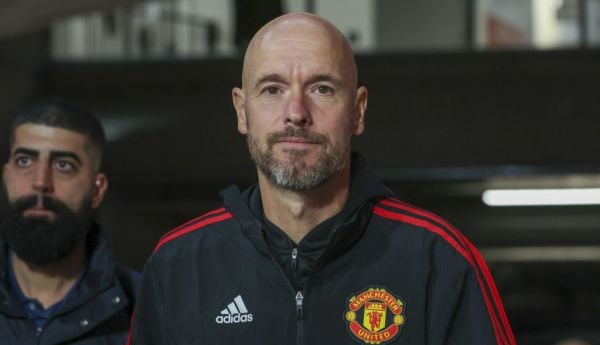 Erik ten Hag told Manchester United’s players their lack of focus was “unacceptable” after blowing a two-goal lead against Aston Villa in the final match of their pre-season tour of Australia and Thailand.

The curtain came down on the four-game series on a sodden, patchy pitch in Perth, where the Red Devils managed to produce a promising first-half performance in challenging conditions.

Jadon Sancho volleyed home his third goal of the tour at the end of a fine United team move to open the scoring in a first half that ended with Marcus Rashford’s strike deflecting in off Matty Cash.

But just like January’s meeting between these sides in the Premier League, Steven Gerrard’s Villa roared back to secure a 2-2 draw as Leon Bailey’s fine solo goal was added to by Calum Chambers’ stoppage-time header.

“In our team it was clear there was a dip,” United boss Ten Hag said. “First half really good. I think we controlled the game, good football, good change of play.

“We had a lot of movement behind the defending line, made great goals and 2-0 up at half-time. Then a drop of focus. It can be that the guys are tired but it’s never an excuse.

“They have to perform and it is what we didn’t do in the second half. But the first half really good.

“It was the focus. I don’t want to make excuses about the pitch or weather. No matter what we have to perform.”

Asked if the late leveller may be good for the players as it underlines that one slight drop in focus can be costly, Ten Hag said: “That is what we just said in the dressing room.

“A drop of focus is unacceptable but to the season I’m happy because now I can tell them it cannot happen.

Ten Hag said he needs to watch Chambers’ leveller back to see if De Gea was at fault at the end of a tour that started with the Dutchman focusing on mistakes in a 4-0 win against Liverpool in Bangkok.

“Football is a sport of mistakes and we have to decrease the mistakes,” he said. “(That’s) clear.

“We will and I have seen a lot of progress in these two weeks. Also again in the first half, I saw really good football, really controlling and dominating the game.

“But we have to learn from (what happened in) the second half. It’s not possible that you give 2-0 up.”

One of the main positives of the pre-season tour has been Anthony Martial’s performances.

The France international appeared to have played his last game for United when he went out on loan to Sevilla in January, but he has started every game on tour and scored three goals.

“I think in general our front men, our forward players did well,” Ten Hag said when asked about Martial.

“They were really well connected, I think that was really a weapon. I think it is really difficult to defend. We have a lot of movement, we have skills and they can finish.”