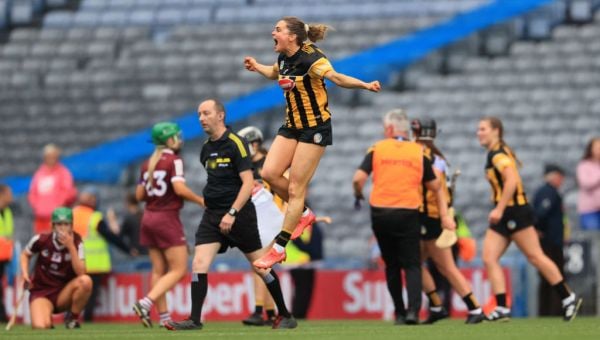 The Cats dethroned defending championships Galway in their semi-final this evening on a scoreline of 01-13 to 00-12, with Laura Murphy providing the all-important goal for Kilkenny.

Galway fought to the final whistle in a bid to hold onto their title but their failure to penetrate the Noresiders’ defence, and in particular to beat outstanding goalkeeper Aoife Norris, proved their undoing.

Earlier, the Rebels survived a titanic tussle with Waterford, overcoming a five-point second-half deficit to eventually chisel out a five-point victory in their pulsating semi-final at Croke Park.

While it was a relief for Matthew Twomey and his troops that they were able to hit top gear with the last eight points, Derek Lyons and his crew will feel that the final scoreline of 0-15 to 0-10 was scant reflection of their efforts.

Brian Cody has stepped down as Kilkenny senior hurling manager after a star-studded 24 years in charge.

The 68-year-old called time on his Cats career after leading his side to another All-Ireland decider last weekend which they lost to Limerick.

In a statement, the Kilkenny County Board expressed “sincere gratitude to Brian for his lifetime of contribution to the county and the commitment and passion he brought as a player and as manager.”

The side dropped two points to Drogheda United following a 1-1 draw this afternoon. Aidomo Emakhu put the champions ahead after 80 minutes, before Evan Weir pulled one back for Drogs with three minutes remaining.

Athlone Town missed the chance to cut the gap to Shelbourne at the top of the Women’s National League.

The sides played out a 1-1 draw in their top-of-the-table clash at Tolka Park. Noelle Murray’s injury time penalty rescued a point for the champions, who maintain their seven-point lead at the summit.

Wexford Youths are second in the table thanks to a 3-1 win over Bohemians. Ellen Molloy scored twice in six minutes to give the homeside all three points at Ferrycarrig Park.

Galway earlier got the better of their Connacht rivals Sligo Rovers. They had to come from behind twice, before running out 5-2 victors and going 4th in the table.

Peamount United rose above Galway to fourth in the table with a 7-0 win over Treaty United, while it finished Cork City 0-3 DLR Waves in the other 5pm kick-off.

Darren Clarke has a share of the lead after the third round of the Senior Open at Gleneagles today.

The Northern Irish man birdied the last to shoot a one-under round 69 and move to nine-under-par.

He is on top of the leaderboard alongside England’s Paul Broadhurst and just one ahead of the chasing pack.

Padraig Harrington also shot a one-under 69 today to move to six-under-par and into a tie for 5th.

Stephanie Meadow is best of the Irish after round three of the Evian Championship.

She shot a level par round of 71 today, which keeps her on two-under-par and in a tie for 51st place.

Leona McGuire is four shots further back following her round of 74.

Canadian Brooke Henderson holds a two-shot lead over the field at 17-under par.

Denmark’s Jonas Vingegaard has done enough to ensure he has all but won cycling’s Tour de France for the first time.

The overall leader maintained his advantage with a second place finish in the stage 20 time trial, which was won by Belgian rider Wout van Aert.

Britain’s Geraint Thomas was fourth – leaving him third in the general classification.

The race ends with its traditional procession in Paris tomorrow.

The Emerald AC clubwoman qualified automatically for the semi-finals in a time of 12.99 seconds.

The Ferrari driver will share the front row with championship leader Max Verstappen, with Sergio Perez in third.