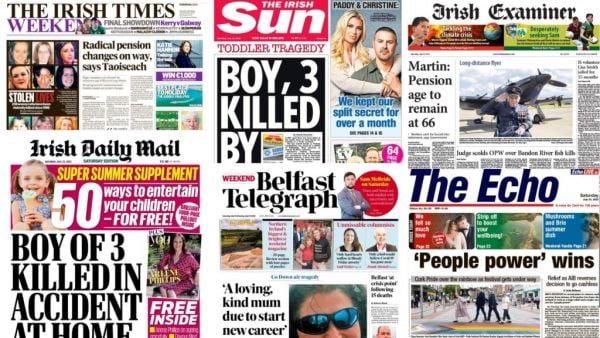 The Saturday papers lead with a proposed shake-up to the pension system, and the tragic death of a toddler following an accident in Limerick.

The Irish Times, the Irish Examiner and the Irish Independent all focus on radical changes to Ireland’s pension system. Taoiseach Micheál Martin signalled that mandatory retirement at 66 will be banned. 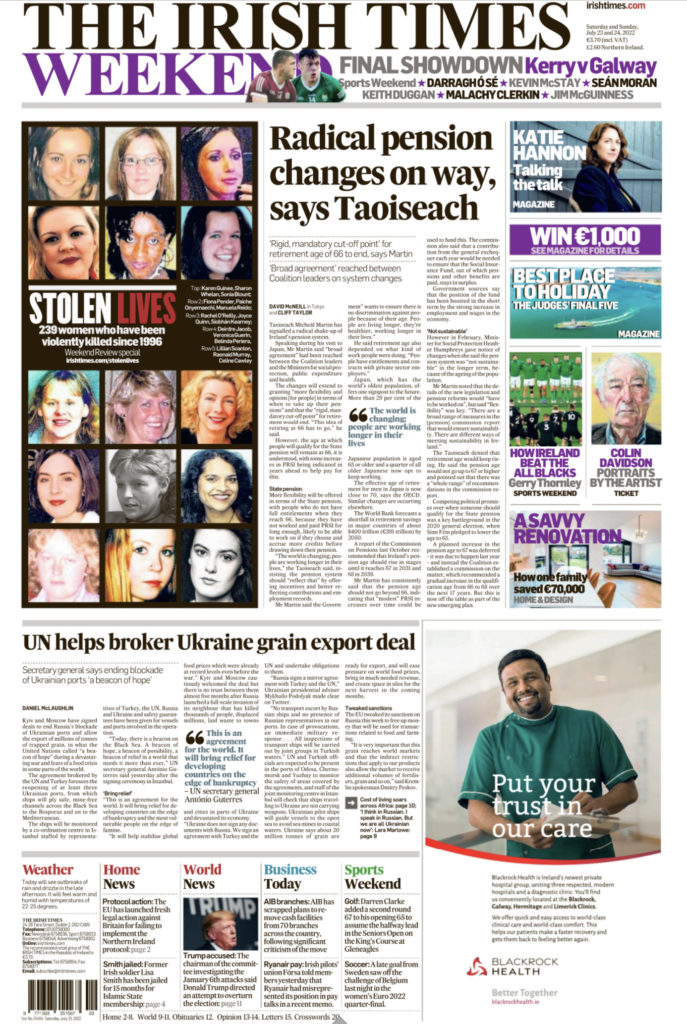 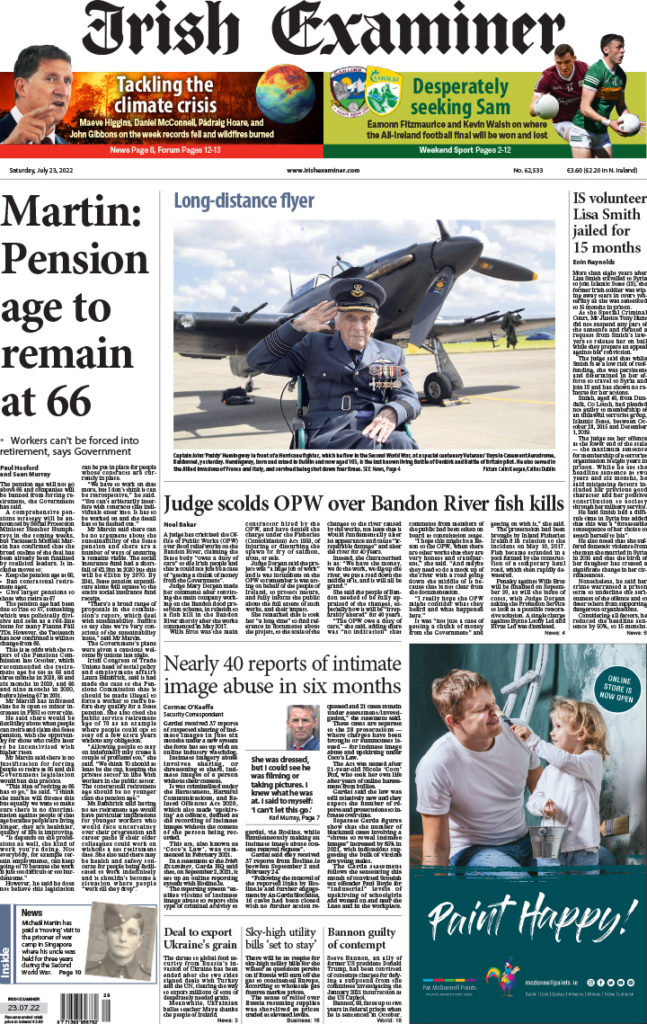 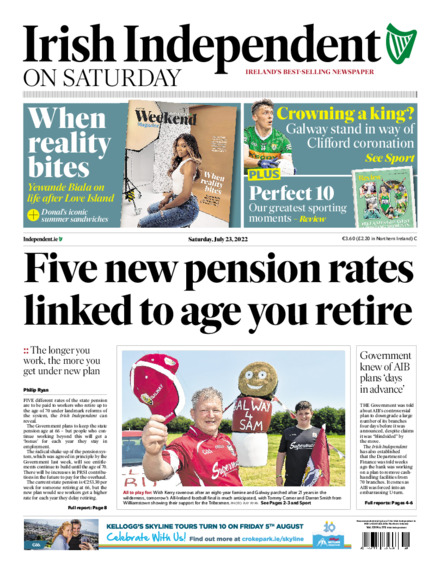 The Irish Daily Mail and the Irish Sun lead with the death of a three-year-old boy at his home in Limerick on Friday, which gardaí are treating as a tragic accident.

The boy was fatally injured when he was struck by a vehicle at Ballyduhig in west Limerick at around 10.30am.

For all the big news and sport, plus a super summer supplement and your brilliant You magazine, pick up a copy of Saturday’s Irish Daily Mail, or click on https://t.co/wKUyK4A9A5 pic.twitter.com/9uLiVdWS43

The Irish Daily Star leads with the sentence given to former Islamic State member Lisa Smith. It also reports that a woman found a dead body in the boot of a rental GoCar.

“People power wins,” says The Echo, after AIB reversed its decision to turn 70 of its bank branches into cashless operations. 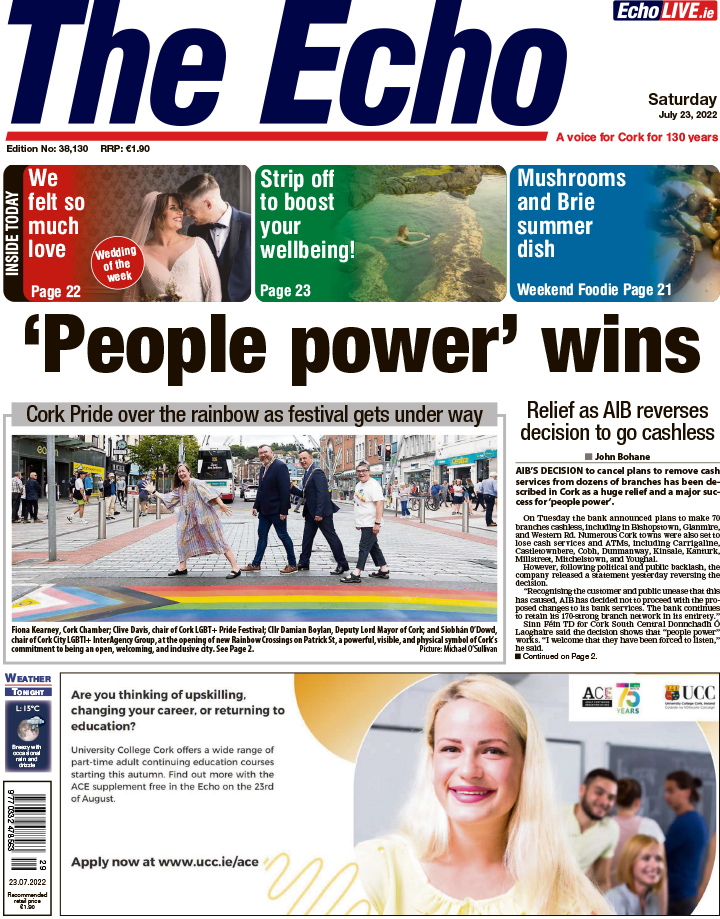 The Belfast Telegraph has a tribute to Caroline Mawhinney, one of the victims of the light airplane crash in Newtownards, Co Down.

Morning readers. Stay with @BelTel for all your breaking news. Here’s a look at the front page of the Belfast Telegraph this morning. To read the full newspaper on your device, go Premium + ➡️ https://t.co/WfXEtzkTSl pic.twitter.com/hAZS6KlQ3H

The British papers are led by a rough start to the busiest holiday weekend of the year.

The Daily Mirror, Daily Mail, The Independent and Daily Star all lead with lengthy delays at the Port of Dover and airports across Britain bringing summer getaways to a standstill.

Tomorrow’s front page: Not so happy holidays after all…🤦‍♂️https://t.co/ORuBqTq7Kp#TomorrowsPapersToday pic.twitter.com/fMJ84xYSdd

FT Weekend and The Daily Telegraph report that UK foreign minister Liz Truss has called on France to fix the issues at the English Channel amid a “ferocious” row over the management of post-Brexit border controls.

Staying with Ms Truss, The Guardian says her promise to “scrap all remaining EU regulations” could result in the disappearance of “hundreds of laws covering employment and environmental protections”.

The iweekend leads with comments from Ms Truss’s “economy guru” that her promised tax cuts would result in interest rates of up to 7 per cent.

the i weekend: @trussliz tax cuts mean interest rates of up to 7%, says her economy guru. #TomorrowsPapersToday pic.twitter.com/xmyrHn9SoZ

Voters back Ms Truss over Tory leadership rival Rishi Sunak, according to the Daily Express.

Meanwhile, The Times reports Mr Sunak has warned Britain is facing a “national emergency” over the economy, NHS backlogs and illegal immigration.

And The Sun says Paddy and Christine McGuiness have announced the end of their marriage.

On tomorrow’s front page: Inside Paddy and ‘miserable’ Christine McGuinness’s shock split and how they kept it secret for weekshttps://t.co/nK3X0BFFMd pic.twitter.com/RTX7lHG1Xq