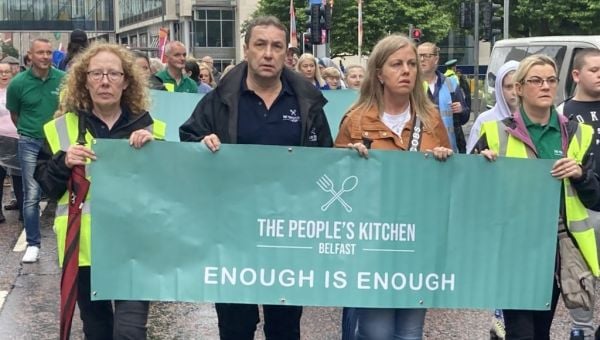 White balloons have been released in memory of those who have died in drugs-related deaths in Belfast amid calls for action from government.

Several hundred people took part in a march to Belfast City Hall on Saturday afternoon under a banner proclaiming “enough is enough”.

It was organised by The People’s Kitchen and homeless charities, and backed by the trade union Unite.

Some 15 people have died in what have been termed as drugs-related deaths in Belfast since the start of June.

It is understood there have been 34 such deaths in greater Belfast area since January, with some warning the Northern Irish capital is in crisis.

A march is underway in Belfast calling for the authorities to act to prevent further deaths of vulnerable people battling addiction pic.twitter.com/Jf3ls49WUn

The procession, which included representatives from homeless charities, trade unions, Sinn Féin, the SDLP and People Before Profit culminated in a demonstration at City Hall.

There were calls for accessible services to support the vulnerable as well as safe consumption rooms for drugs.

There was also a challenge to Sinn Féin Stormont leader Michelle O’Neill and DUP leader Jeffrey Donaldson by a homeless man to experience life on the streets themselves.

Sean Kane said: “Our government needs to get their finger out, I’m willing to talk to any politician to come to some sort of agreement as our homeless lives cannot be replaced.

“It’s time we all came together and sat around the table and talked.

“I challenge Michelle O’Neill and Jeffrey Donaldson to come on the streets and experience homelessness for three days and we can use it as a funding opportunity to pay for the funerals of these women who lost their lives at the weekend.”

Lee-Maria Hughes recalled her sister Catherine Kenny who died in a doorway in Donegall Place in March 2016.

“Catherine was a sister, a daughter, an aunt and she was dearly loved,” she said.

“Six years on and it appears we are in no better a place, in fact perhaps worse.”

Described the situation as a crisis, Ms Hughes called for early intervention for those struggling with their mental health.

“Catherine struggled with her mental health, it followed her everywhere, and the only escape that she had was alcohol and drugs.

“Had Catherine’s mental issues been identified, managed and treated in her early teens, I have no doubt in my mind that she would still be alive today.”

SDLP councillor Paul McCusker, who has been working with the homeless for 10 years, said he has never seen as much despair and devastation on the streets.

“Enough is enough, and it’s time for change,” he said to cheers.

Speaking ahead of the demonstration he said homelessness, addiction and mental health have been serious issues in Belfast for many years, but they have not seen the needed response such as early intervention.

“Today is to unite people to call for that support that is urgently needed to address the needs in Belfast around the vulnerable but also people caught up, feeling trapped within systems, feeling a lack of hope and support,” he said.

“Belfast is in crisis at the minute around homelessness and addiction and mental health and we have to respond to that crisis to save more lives.”

Lisa Arthurs from north Belfast was among those taking part in the event.

Her daughter Gabby Connolly died at the age of 18 on July 10th, 2020 in a drugs-related incident.

“I’m here today to fight a campaign for her because more needs to be done for these kids,” she said.

Ms Arthurs said her daughter was told she would have to wait six to 10 months for an appointment for mental health services.

“She did a story-telling project, and said that she needed the help and there wasn’t enough resources, and by the time someone got her help it would be too late, and obviously it was too late,” she said.

A meeting took place at Belfast City Hall on Friday between councillors and representatives from the PSNI, Housing Executive, Belfast Trust, Department of Health, Department for Communities, Department of Justice and the Public Health Agency to discuss the situation.

Lord Mayor Tina Black said the council will continue to act as a city convenor to support the ongoing work of Stormont departments and statutory agencies to find solutions to address the complex issues associated with addiction and homelessness, and to end long-term homelessness in the city.