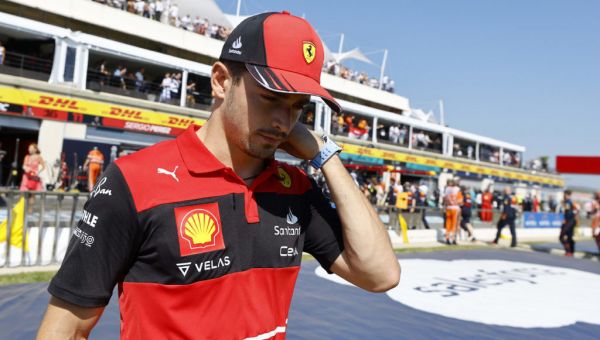 Charles Leclerc said he does not deserve to be crowned Formula One world champion after he crashed out while leading Sunday’s French Grand Prix.

Max Verstappen took advantage of Leclerc’s catastrophic demise to race to his seventh victory of the season and extend his title lead over his Ferrari rival from 38 to 63 points.

Leclerc could be leading this season’s title race but for a catalogue of mechanical and strategical mistakes, as well as driver errors in Imola, and now in the south of France after he lost control through Turn 11 on lap 18 of 53.

“I feel like I am performing at the highest level of my career, but there is no point in performing at a high level if I make those mistakes,” said Leclerc, 24.

“I lost 25 points here as it was likely I was going to win, and seven in Imola because of my mistake.

“So at the end of the year if there are 32 points missing then I know it has come from me, and I did not deserve to win the championship. I know I need to get on top of things if I want to be a world champion.”

Leclerc’s challenge appeared to be back on track after he built on his commanding win a fortnight ago in Austria with pole position.

The Monegasque then sped away from his marks before keeping Verstappen at bay before the Dutchman stopped for fresh tyres.

But the race turned on its head when Leclerc’s scarlet machine slammed into the barrier.

Your podium stars in France 💫

Leclerc’s response over the radio was emphatic. “Nooooooooo,” he yelled, before pointing the finger of blame at a sticky throttle, only to hold his hands up on his return to the paddock.

He will head to next weekend’s Hungarian Grand Prix – the last round before the summer break – the equivalent of two and a half wins behind Verstappen with 10 rounds remaining.

“I will believe in the championship until the end, and we will count at the end but, of course, it doesn’t look great.

“I’m going to close myself off at home and only leave when I have to get the plane to Budapest. I just want to be alone.”