Ukrainian woman rescued from invasion by Irish church she volunteered for 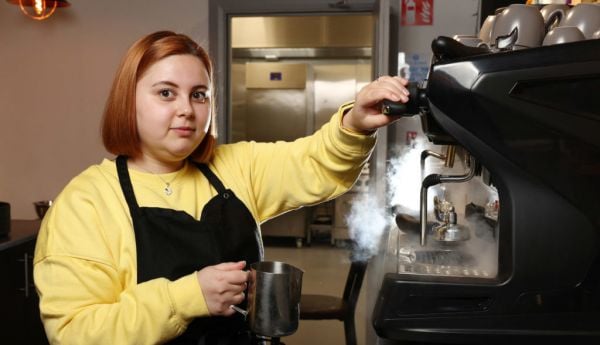 A young Ukrainian woman has been rescued from the Russian invasion by an Irish church she volunteered with three years ago.

Oleksandra Hromova (23) and her mother Yuliia (45), from Dnipro, are now living in Dublin thanks to two Salvation Army officers.

The former management and economics student first came to Ireland in 2019 during a gap year to volunteer with the church and charity – one of the largest providers of homelessness services in the capital.

Ms Hromova is again volunteering with the charity, as well as working as a barista at its Hub Cafe on King’s Inns Street.

“I couldn’t cope staying in Ukraine,” said Oleksandra, who has been living in The Salvation Army accommodation in Dublin with her mother since March.

They endured a 30-hour train and bus trek towards the Polish border.

“The airport [in Dnipro] was destroyed, we were living not far from there; that’s what made me move. The airport was bombed a second time during the rescue effort,” she said.

“On the very first day of the war, I woke up to explosions, there were four really strong ones and our windows were shaking.

“I was so scared. I was just sitting in the corridor of my apartment, the sirens were going off and I decided I needed to leave.”

Captains Tim and Charlotte Lennox described their concern for Ms Hromova, and a second student Alisa (22), who also worked in the church’s family hubs – but remained in Ukraine.

“We kept in touch the whole time,” he said.

“The first thing we did was to phone them both to find out what was going on. We said quite early on, ‘if you need to get out, just know there is a place for you to come to’.

“They are like our family and I couldn’t get it out of my mind for days, I was worried sick.

“It took them 36 hours to get into Poland so we just went ahead and booked a flight for them. We managed to get it all sorted in a 72-hour period.

“Bringing Oleksandra here was not part of our homeless accommodation or refugee projects, it was simply about helping out a fellow church member at the most difficult point in her life.”

Oleksandra said without their help, she and her mother could not have left Ukraine, but she looks forward to the day she can return.

“I love Dublin but I don’t want to stay here for 10 years. I really want to go home before the new year, but now, I’m not sure. I’m still afraid that when I go back, I will not feel like I’m in a safe place,” she said.