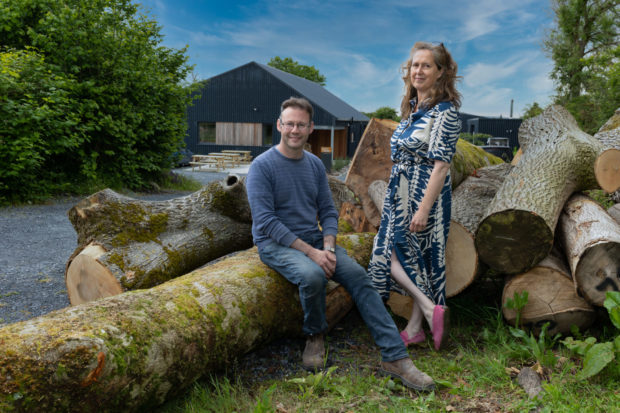 INTERNATIONAL visitors have been flocking from all over the world to visit south Carlow. They come not for the majestic sights but to learn from master woodturner Glenn Lucas in Garryhill.

Glenn and his wife Cornelia opened a purpose-built woodturning study centre last year in the beautiful setting of the foothills of Mount Leinster offering places to scores of visitors each year. In addition, Glenn has a successful range of DVDs, woodturning tools, even a video subscription service, along with selling expertly-crafted bowls, which are still the core of the business.

Through his craft, Glenn has travelled around the world to other training facilities. What is in Garryhill cannot be found anywhere else. Other training centres internationally are located in industrial estates or wood turning is just one of many uses for the space. By contrast, each visitor to Garryhill has their own lathe and a dream set of kit, while each work station has an extraction tube to take all the dust away.

It took four years of planning but is a beautifully realised project and is a far cry from when construction on the training centre ground to a halt for months on end during Covid. “The only building going on was the crows in it,” joked Cornelia.

What Ballymaloe is to cooking, Garryhill is to woodturning. People come to Glenn’s with a variety of motivations, from professional to pastime. Some work in the woodturning field and want to refine their technique and become more efficient. Others want to start their own business, while there are furniture-making students and woodturning teachers among them. The majority are hobbyists, while there are also classes for absolute beginners. 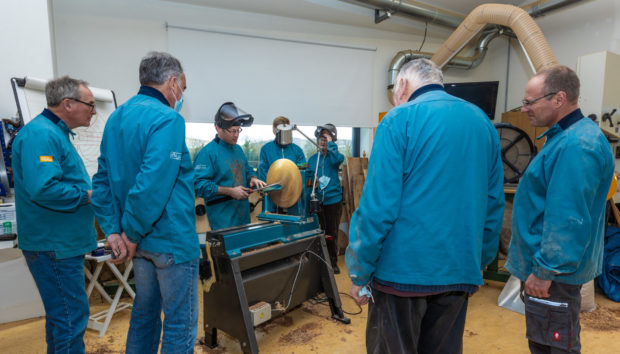 Glenn giving a demonstration on the lathe

“It allows people who may not even have held a screwdriver before to come home with a piece they can be proud of, an heirloom piece,” said Glenn.

Around 70% of those who take classes in Garryhill are from North America, followed by Ireland and the Scandinavian countries.

Many who attend bring a partner, and groups generally stay in Borris. It is great spin-off for the area, with local restaurants like Clashganny House and the Step House benefiting along with other local guesthouses and Air BnBs. A conservative estimate of the benefit locally is around €200,000. A trip to south Carlow provides a uniquely rich experience, with many opting to return.

One group from a Swedish company enjoyed kayaking along the Barrow and a hike on Mount Leinster. Glenn and Cornelia tend to operate a week of classes followed by a week of production and other business duties.

“I think we have a nice balance between production and teaching,” said Glenn. “Focusing on production, it leaves you very vulnerable to recession. If we were just reliant on bowl sales, even in the pandemic, we would have been in trouble.”

It is a remarkable Carlow success story, driven by hard work, adaptation and refinement. 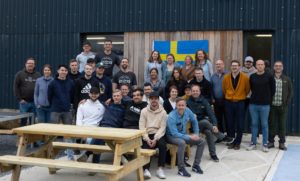 Both Glenn and Cornelia are from families who were self-employed and entrepreneurial. Son of Tom and Helen, Glenn loved making things from an early age. He started woodturning at 16. By chance, he saw an old lathe up at Jim Quirke’s engineering. He bought it from Jim. He didn’t know how to use it, but within weeks was selling bowls to his teachers and relatives.

A student at Kilkenny College, the school funded a woodturning class for him, while he exhibited at events like the Fringe festival in Kilkenny making money that enabled him to purchase more equipment.

He became an apprentice cabinet maker in Manning’s of Bagenalstown in 1990. He thought he would spend his life making furniture, but the Bagenalstown business went through a bumpy period and Glenn started out on his own. He joined a Design and Craft Council business course. As part of the course, he moved to Co Louth to work, where he met Cornelia, who worked with the council.

A big break was featuring in the Showcase Ireland expo in Dublin. He met Simon Pearce, a brother of the famous potter Stephen in east Cork. The Pearces made an initial order for 50 of Glenn’s bowls for their store. A follow-up order came for 300. Glenn made the popular salad bowls for around 15 years for Pearces and other retail outlets across Ireland. The knowledge and quality he developed in doing so led to a brand and reputation that would make him sought-after worldwide. 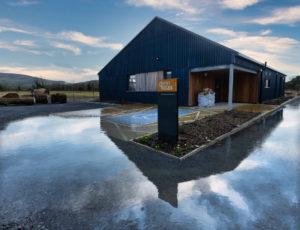 The recession of 2008 saw sales evaporate, but after being invited to present at a US woodturning conference, he was in demand for demonstrations and conferences. Tool companies sought Glenn out for his endorsement and expertise. Glenn has a deal with a Utah company for a branded range of tools, sharpened to his specifications. They sell in the tens of thousands every year.

Glenn has also completed wide-ranging commissions, including an ambitious commemorative piece to mark a 2015 Lufthansa airplane crash in the Alps, which saw 149 spherical boxes being crafted as part of a commemorative structure.

The Carlow business also created professional videos for DVD. Glenn had done a course in film-making, so was able to develop a great package. When Covid-19 hit, the company was able to take those skills and direct them towards Zoom classes with professional cameras and a rig.

Glenn has been able to do over 100 international presentations from a converted room that was supposed to be a workshop. It is telling that despite the end of the pandemic, the company is keeping this ‘Zoom room’.

Glenn used his old woodturning studio for classes at first, before construction on the study facility began in 2019.

“We had got to the point of reaching capacity,” said Glenn. “The old building was built as a woodturning studio for my own work. We accepted requests for classes and that grew into something much bigger and quicker than expected.”

A significant amount of the wood Glenn uses comes from fallen trees. Glenn is always on the lookout for ash, sycamore and beech trees. He has a specially rigged trailer that he can lift and tow away a trunk. He either pays for the wood or makes bowls from the trees for its owners. 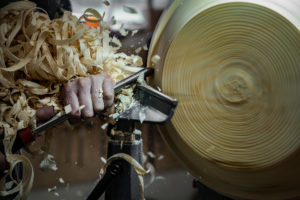 The shavings from the business are used as bedding for animals.

Instagram is also hugely valuable to the business. Some who come to Garryhill from overseas first found out about him on social media. Glenn has a knack for a good visual story. One video had Glenn make an egg cup in the time it took to boil an egg.

Glenn and Cornelia have two children, Mathew, who is in third level, and Isabel, a sixth-year student in Kilkenny College.

The company is currently making a large structure to air dry wood over several years and is looking to develop its online marketing. “There is always something new to be done,” said Glenn.

“Being self-employed is intense, but you reap the rewards of the long hours.”

Remembering the ambush of the IRA in Ballymurphy, 1921 (Part 2)

‘Bloodbath’: remembering the ambush of the IRA in Ballymurphy, 1921