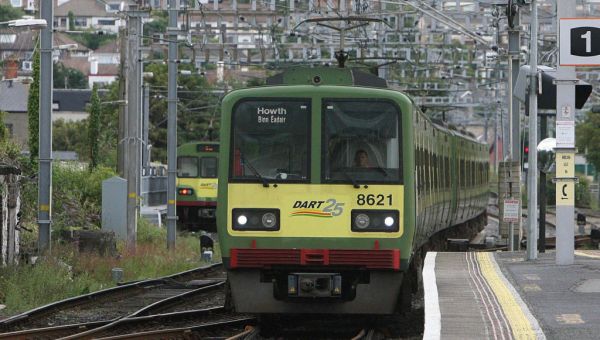 Irish Rail has apologised for train delays that “ruined” people’s day out to Co Wicklow for the Bray Air Display after “chaotic” scenes at the weekend.

There were nine additional Dart services operating to accommodate people travelling to Bray for the air show on Sunday, which returned this year after the Covid-19 pandemic.

But passengers travelling southbound reported waiting on trains in the heat without air conditioning, open windows, or enough information on how long the delays would be.

Some passengers then opened the train doors to disembark from the carriages and walked along the tracks, which Irish Rail said caused further delays.

Update: Can passengers outside of Bray please stay onboard the train. Staff and Gardai are in attendance. Services will not be permitted to move until the line is clear. For health and safety reasons, passengers are not permitted on the line. -AD https://t.co/KrWlPMYAmJ

“We obviously apologise to people that were caught up in what was a very distressing situation for many customers,” Irish Rail spokesperson Barry Kenny said on RTÉ Radio’s Morning Ireland.

“It had been a busy day, the platforms just took a little time to come clear, and on that Dart … a small number of people pushed open a door, notwithstanding the fact it was literally a couple of minutes until the Dart was going to proceed onto the platform.

“And once those people did that, and were on the track, we obviously couldn’t operate any train in or out of Bray station until it was confirmed that the track was clear.”

Mr Kenny said it was 2.55pm when people began leaving the Dart, and it was 5.15pm when the line reopened.

Irish Rail is to investigate the incident, including the information that was provided to passengers.

Later, the general secretary of the National Bus and Railworkers Union (NBRU), Dermot O’Leary said the incident highlights a number of issues which have been of concern to his members for some time.

Mr O’Leary told RTÉ Radio’s Today show that air-conditioning and policing on trains, as well as staffing levels at stations were issues which could have had an impact on the events on Sunday.

“It was a horrible experience for people”, he acknowledged.

However, he said once the doors were forced open and there were people on the line it was standard procedure that services should stop.

Mr O’Leary added he did not want to indulge in “finger pointing” but said once the train doors are opened “all bets are off”.