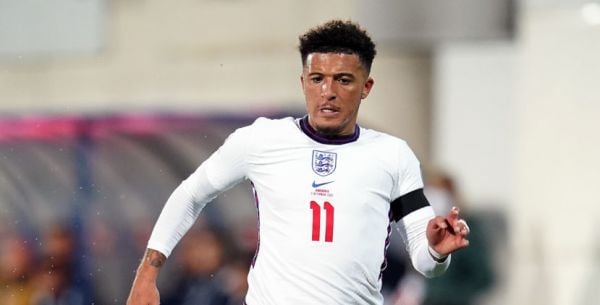 Sancho, Marcus Rashford and Bukayo Saka, received a barrage of abuse on social media after they missed penalties in the shootout defeat to Italy at Wembley Stadium on July 11 last year.

The incident prompted a public outcry and fuelled wider debate amid moves by the Government to protect users from harmful online content.

The 23-year-old pleaded guilty earlier this month to sending a grossly offensive, indecent or obscene character.

During his sentencing on Monday, prosecutor Denise Clewes said: “This is a matter where a racially abusive message was sent to a member of the England national football team following the team’s defeat in the European Championships in the penalties.

“In the match, the players who had been unsuccessful with the penalties they had taken were subjected to a torrent of racist abuse on social media.”

Ms Clewes said Roj-Oz had been drinking when he published the emoji in the comments under one of Sancho’s posts.

She said that while Sancho had not given an impact statement to the court, “it was widely publicised at the time in the media the effect that it had on the players”.

Ms Clewes also paraphrased a statement from Edleen John, a co-partner for equality, diversity and inclusion at the Football Association, who said the abuse occurs in society more broadly and the players were subjected to it while they were “basically doing their job”.

Thomas Beardsworth, defending, said that because Sancho did not give an impact statement to the court, there was no concrete proof that Roj-Oz’s comment directly caused him fear and distress – the threshold for a more severe sentence.

“Mr Sancho did make a public statement at the time and there is nothing in there that goes to substantial distress and fear,” he said.

Mr Beardsworth later added: “Sentence Mr Roj-Oz for what he has done and only what he has done – as to what other players have suffered, please do not treat that as part of the sentencing exercise.”

He called Roj-Oz a “good kid who did a bad thing” in a “moment of madness”.

“It is deeply unfortunate that he expressed a frustration in the form of a classic racist trope,” he added.

“It is one message. It is two clicks – one to click on the emoji and one to post it.”

He added that the 23-year-old has a degree and is a carer to his mother, adding: “This conviction may have a serious effect on him as it may be a source of embarrassment in the professional life he hopes to have.”

He was also given a curfew between 9pm and 6am for three months and ordered to pay £500 in compensation to Sancho.

In his sentencing remarks, Mr Kumar said: “This is a matter of high culpability.

“This was an incident of targeted offending which maximises the effect of that offence, given the method of delivery and the timing, namely on Instagram very shortly after a national event.”

Mr Kumar said he did not accept the defence’s argument, and he could be sure it caused Mr Sancho alarm, saying the footballer suffered “the most terrible and public racist abuse on an extremely high-profile media platform”.

However, the judge said he would not give an immediate custodial sentence because it would affect Roj-Oz’s “innocent” mother.

The sentence came after Scotland Yard was criticised for securing a “paltry” four convictions following the racist abuse of England footballers after the Euro 2020 final.

Earlier this month, Scotland Yard provided an update showing its investigations had resulted in the convictions of four men, including Roj-Oz. Two have received jail sentences.