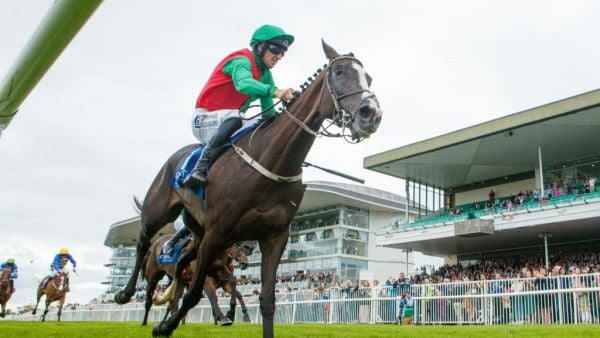 The Willie Mullins-trained Echoes In The Rain has claimed the feature race on the opening day of the Galway Festival – the Connacht Hotel Handicap.

The 11-to-4 favourite came home ahead of stablemate, Maze Runner, while 20-to-1 shot Dutch Schultz was third for trainer, Gavin Cromwell.

Patrick Mullins has won plenty of big races, counting a clutch of Grade One successes on his CV, but he had yet to land a race that is viewed as one of the highlights of the amateur season.

However, the rider righted that statistic in style as Echoes In Rain, trained by his father Willie Mullins, was tanking along a fair way out and despite getting a bump before turning into the straight, she was in a perfect position to challenge in the two-mile-one-furlong contest.

🏆4th race: The @ConnachtHotel (Q.R.) Handicap
Won by: Echoes in Rain
Trained by: @WillieMullinsNH
Ridden by: Patrick Mullins
Owned by: Barnane Stud
Congratulations from all the team at Galway Racecourse #GalwayRaces #GiddyforGalway pic.twitter.com/0IButPfRCh

Patricks Mullins had to get serious on the 11-4 favourite in the closing stages, but she found plenty for pressure to triumph by a length and a half from stablemate Maze Runner – with Mullins punching the air passing the post. Dutch Schultz was third with another Mullins inmate Lot Of Joy – a Swedish St Leger winner – making eyecatching ground to finish fourth.

Patrick Mullins said: “Sixteenth time lucky! It’s the amateur Derby and my father won it on Pargan, for my grandfather.

“There’s plenty more (races for me to win) – there’s the Foxhunters’ in Aintree, there’s the Kim Muir in Cheltenham, so there’s more to do. And a Galway Plate wouldn’t go astray, but it won’t be this year, unfortunately.

“We took the hood off her today, and she got very relaxed. I thought, going down to the start, that she was going to be too keen. She was quite buzzed up but we went a good gallop. She got a little bit keen and I actually let her slide on a bit rather than taking her back, and she settled again, and I got a lovely clear run.”

Willie Mullins was thrilled to see his son prevail, although he was also cheering on the second.

He explained: “I wasn’t sure which horse to shout for as my wife owns the second! Anyhow, I’m delighted he won it and delighted for the owners in Barnane Stud in Templemore, who have a very good flat enterprise.

“She is high quality, is a little temperamental in her races but Patrick said they went fast enough to get her settled. He stayed wide and out of trouble.

“Maze Runner ran a cracker and I’m delighted for Elliot Ohgren, a top-class Swedish amateur, who has been with us for a year.”