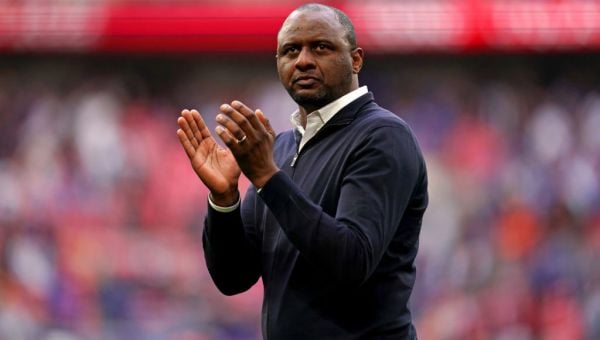 The Frenchman’s first year in south London was a resounding success, from his side’s stunning win at Manchester City in October to their brilliant FA Cup semi-final run.

Add a career-high 14 league goals for lynchpin Wilfried Zaha and a breakthrough campaign from loanee Conor Gallagher and it is no wonder Vieira was shortlisted for the Premier League manager of the season award.

“He’s done an outstanding job,” said Morrison, who scored more than 100 goals in his two spells with the club, told the PA news agency.

“No disrespect to Palace, it is my team, I was there nine-and-a-half years, but there will be big teams looking at Patrick Vieira.

“The style of play, to evolve that quickly, was sensational. He got the best out of players. He’s one of the best midfielders the Premier League has ever seen, and I think he will be one of the best managers.”

Morrison’s assessment echoed that of 93 per cent of Palace fans who answered yes to the question “is your manager the right man to take the club forward?” in Sky Bet’s 2022 Fan Hope survey results, released Monday.

The study of 1,600 UK-based Premier League fans, evenly split across all 20 clubs, revealed Palace supporters were the seventh-most confident in their man at the helm.

Liverpool’s Jurgen Klopp led the pack with a 99 per cent approval rating, one point ahead of Manchester City’s Pep Guardiola, while only 66 per cent had confidence  in Southampton’s last-placed Ralph Hasenhuttl.

Klopp was also overwhelmingly voted the top manager in the Premier League, earning 40 per cent of the vote share, with runner-up Guardiola, at 26 per cent, the only other boss in double-digits.

Vieira’s success no doubt also contributed to Palace supporters’ dramatic shift in spirits from this time last year. Eagles fans were one of just eight fanbases revealed to be more hopeful than last season – 18.64 per cent more optimistic than 2021, second only to Newcastle (94.92) and Spurs’ (19.89) positive pendulum swings.

Palace was the 10th-most optimistic fanbase overall, with defending champions City unsurprisingly coming out on top and Everton’s the most pessimistic  going into the 2022/23 campaign.

Meanwhile, an astonishing 76 per cent of Palace supporters believe Vieira’s side will finish inside the top 10 this campaign. As did Morrison, who initially suggested a “top-10th or top-11th finish would be a good season” but backed the SE25 faithful when pressed.

“The keys will be keeping everyone fit, keeping the big players fit, adding a few more additions to the squad, and starting the season well—that’s the most important thing. You don’t want to be playing catch-up.”

Palace will have the first chance to test their fans’ new-found optimism at the Premier League opener on August 5, when they take on Arsenal under the Friday night lights at Selhurst Park.

And if any are concerned that the man in their manager’s chair could be poached by survey time next year, Morrison offered a few words of comfort.

“The fans shouldn’t worry, they should just enjoy him while he’s here,” he said, before quickly adding, “I don’t think he’ll leave anyway. For now I still think he’s learning and growing with this team, and hopefully they can pick up a trophy this season.”

#This research and interview was completed in partnership with Sky Bet and YouGov as part of their Fan Hopes campaign. The research asked fans of each Premier League team a series of questions about their expectations of the new season. Fans can see more exciting and exclusive content in the Sky Bet Fan Hope Hub, here: https://m.skybet.com/newseason?DCMP_soc_hatch