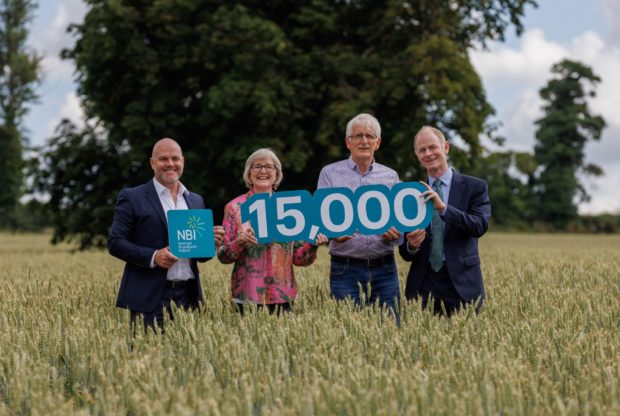 A Carlow farming family have spoken of the importance of high-speed broadband in rural areas as National Broadband Ireland celebrated the milestone of reaching 15,000 connections.

John and Marian, recent customers of Aptus in Carlow, said: “A reliable high-speed broadband connection is an absolute essential for Ireland’s farming community. To be based in rural County Carlow and able to connect to next generation fibre broadband is of huge benefit. This will be vital for the day-to-day running of our farm as well as enabling us to avail of new innovations to support our productivity.”

A total of 15,484 premises – including homes, schools, businesses and community facilities – are now connected to NBI’s network, meaning that these premises now have guaranteed access to minimum broadband speeds of 500Mb. A further 70,716 premises are now in a position to place an order or pre-order for service with one of the providers that are registered on the NBI network; NBI projects that this figure will increase to 128,000 premises by the end of 2022.

NBI’s most recent progress update shows strong momentum in the roll-out across all 26 counties, with take-up rates of over 30% already in Deployment Areas which have been live for a period of six months or more.

Minister Ossian Smyth, minister of state with responsibility for communications, said: “The National Broadband Plan represents an investment of up to €2.7bn in rural Ireland.  The plan is to address regional imbalances and ensure equal opportunities for all communities across Ireland.  The 15,000th connection marks a major milestone in the rollout of the National Broadband Plan and I’m delighted that so many homes and businesses have been connected and can now receive access to world-leading fibre network.”

CEO of NBI, Peter Hendrick said: “15,000 connections is a significant milestone for the roll-out and one that we’re continuing to build upon, as our ability to move premises from the construction phase to the order phase ramps up. Our early take-up levels have exceeded our expectations and are growing all the time, so we anticipate very strong future demand from customers nationwide.”

Fergal Kearney, CEO of retail broadband provider Aptus, said: “We are delighted to be bringing NBI fibre to homes and businesses, delivering high-speed broadband with consistent coverage at a reasonable price. We pride ourselves on customer service and the positive feedback we are receiving is a sure sign our partnership with NBI is delivering broadband access to our customers in the South East which is second-to-none.”