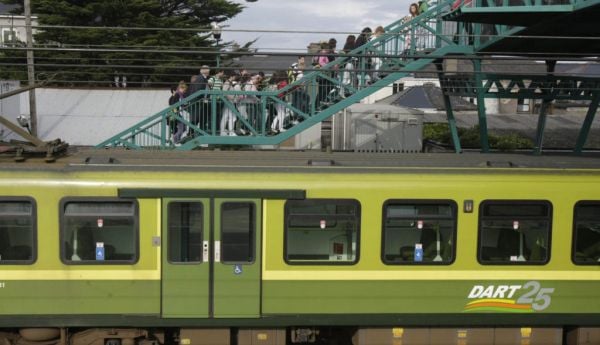 A teenage boy who pushed his bike at a teenage girl on a Dart station, causing her to fall head first off the platform and become briefly trapped beside a train, will avoid a detention sentence.

A video of the April 2021 incident at Howth Junction Dart station, which was leaked online, went on to be viewed 100 million times worldwide, the victim in the case told Dublin Circuit Criminal Court on Tuesday in her victim impact statement.

The girl, who was present in court with her parents, said she felt “let down” by Irish Rail, with the investigating garda telling the court it was believed the CCTV footage was leaked from within the company.

“I’m not just an image on CCTV,” the teenage girl said in her statement, which was read out in court by Garda Kevin O’Boyle. “I’m a human being standing here before you today.”

In relation to the boy’s actions, the girl said she couldn’t believe a human being could do such a thing to another person and think it was OK to walk away. “None of these boys came forward,” she said.

The 17-year-old boy, who cannot be named because he is a juvenile, pleaded guilty to one count of assault causing harm to the girl at Howth Junction Dart station on April 1st, 2021. He was discharged from a further count of violent disorder after the judge ruled there was insufficient evidence for this charge.

Handing down sentence, Judge Martin Nolan said that it was a “terrifying” experience for the girl, who was momentarily trapped between the train and the platform after being knocked over by the boy deliberately putting his bike in her path.

The court heard the girl suffered concussion in the wake of the incident and was hospitalised. She has no memory of the assault, but outlined a number of difficulties she has experienced as a result of the events that day.

Judge Nolan said the boy deliberately turned his bike towards the girl, causing her to lose balance and fall between the platform and the train. “This defendant is responsible for her injuries,” he said.

Considering whether the boy deliberately meant for the girl to fall off the platform, Judge Nolan said he did not believe the boy intended for it to happen. “It was prankish behaviour, irresponsible behaviour,” the judge said. “But it is highly unlikely he anticipated what occurred.”

Taking into account a number of mitigating factors, including the boy’s guilty plea, his lack of prior convictions and his remorse, the judge said he would deal with the boy by way of community sanctions. He ordered a Probation Services report and adjourned the case to August 24th.

Garda O’Boyle told Tessa White BL, prosecuting, that a group of about 10 boys, including the accused, were getting off the Dart on the day in question when the incident occurred.

The court was shown video footage taken from the body cam of a security guard, who was ushering the boys and their bikes off the train and telling them: “Stop acting the bollox.”

The CCTV footage then showed the girl and a number of her friends running to get on the Dart, before three of the boys in the group accosted three of them. One boy swung his leg up over his bike, hitting one girl towards her face. Another boy jumped out in front of a girl, causing her to nearly trip.

This accused then pushed his bike into the path of the victim, causing her to lose her balance and roll off the platform. He was 16 years old at the time.

The court was shown further footage of the group of boys fleeing the station with their bikes.

This boy was identified from the CCTV footage and arrested by gardaí a month later. When interviewed, he made full admissions.

He told gardaí he looked back to make sure the girl was OK before he left the scene. He said he was “in shock” afterwards and that he never meant for her to fall off the platform.

Michael O’Higgins SC, defending, said the boy wished to apologise “unreservedly” to the girl for his actions on the day, which counsel described as “completely thoughtless”. “He is embarrassed and ashamed at his connection to these events,” Mr O’Higgins said.

Mr O’Higgins submitted that the incident stemmed out of “16-year-olds messing” and was not an act of gratuitous violence. He said the incident occurred during the Covid pandemic, when there was no school, no structure and no social outlets for teenagers.

Defence counsel said the train driver saw the girl falling off the platform and the train was never in danger of moving off.

Mr O’Higgins said the boy comes from a respectable family, who were in court to support him. Although they are not particularly well-off, he said the boy’s parents had €2,000 in court as a token of their remorse.

The court heard this €2,000 will be repaid by the boy to his parents, who wished it to be seen not as compensation for the girl, but as a penalty he must pay for his actions on that day.

Mr O’Higgins said the boy, who has no previous convictions, got “the fright of his life”. “This has been a huge eye-opener for him,” he said.