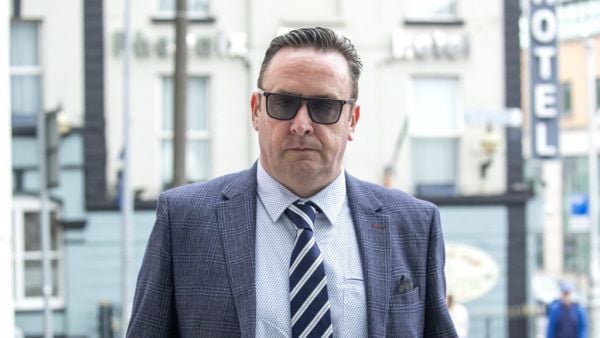 A serving garda has been jailed for three years and three months for the coercive control of his terminally ill partner.

The 43-year-old woman told Dublin Circuit Criminal Court on Monday how her former partner Paul Moody told her the only reason he had visited her while in hospital was to “watch you bleed to death”.

She was giving her victim impact statement in the sentence hearing of the 42-year-old man who harassed, threatened, assaulted, stole from and controlled the woman for over four years after they met online in 2017.

The court heard that the man sent the woman over 30,000 messages over those years and in one 14-hour period, in July 2018, sent her 652 messages, amounting to one message every 90 seconds.

The messages were described in court as threatening, vile and abusive.

In one message he described her as being “riddled with cancer”, in another, while she was on holiday without him, he said he hoped she would “get raped and bleed”.

In another, after they had a row while on holiday together, he messaged her the following morning and said she was “flaunting your body around the pool” calling her a “dirtbox” and a “scumbag”.

The man threatened to stick a knife in her in one voice message. He also took photos of her naked, unbeknownst to her and threatened to post them online.

Moody, of St Raphael’s Manor, Celbridge, Co Kildare, pleaded guilty at Dublin Circuit Criminal Court to a charge of coercive control in relation to the woman within the state on dates between January 1st, 2019 and November 30th, 2020. The law for the offence came into effect in January 2019.

Sentencing him on Tuesday Judge Martin Nolan noted that the maximum sentence available to the court for this offence is five years.

He said Moody’s behaviour was at the highest end of the offence but the court had to take Moody’s guilty plea into consideration, and he reduced a five-year headline sentence to three years and three months.

He said Moody had carried out a catalogue of vile and humiliating criminal misbehaviour.

He said he abused his position as a garda to obtain information which he used to harass and humiliate the victim, and he also endangered her life by driving recklessly at one point.

Moody joined the gardaí in 2000 but was suspended from duty in March 2021, following a search of his home arising out of this investigation. Sean Gillane SC, defending, told the court that his client will resign from An Garda Síochána.

Detective Inspector Cormac Brennan told Shane Costello SC, prosecuting, that an investigation was launched against the man after he made a complaint about one of the woman’s relatives and handed in his own phone to allow for it to be examined in the context of that allegation.

Officers became concerned that there was an abusive relationship between himself and the victim, and they arranged to meet the woman. She later made a statement of complaint, which ran to 280 pages.

The book of evidence also includes 1GB of electronic data, communication between him and the woman, which counsel said equates to 33,000 pages of information or almost two volumes of the Encyclopaedia Britannica.

The woman took to the stand to read her victim impact statement in which she outlined how, after an initial normal relationship with a “charming” and “funny” man, he “slowly and surely” broke her down.

“I was not just fighting cancer. I was up against a monster who would take away any chance I had of surviving,” she said.

She said she couldn’t battle cancer and a war with him. “I always thought if I could get better, I could get away from him.”

“I believed he was going to kill me so many times. I can feel the weight of him on my body, choking me, ripping out my hair from the roots. I was afraid to show vulnerability as that was when he attacked me the most,” the woman continued.

She said he was aware of how weak and sick she was from chemotherapy and described him stealing her cancer medication, knowing that she couldn’t afford to replace it.

She described an occasion of driving to hospital with Moody in the passenger seat. He became verbally abusive, and she pulled over to let him get out. He then took her hospital bag with him.

Later he came to the hospital. He told her that the only reason he was there was so he could “watch you bleed to death”. Moody began to record her, and she asked that he be removed from the hospital.

“That was the last straw … that is the day he broke me,” she said.

The woman said she felt like Moody knew what was going on in her mind because he had access to her phone.

“It felt like my mind was broken glass. I didn’t know what was right or wrong anymore because he was breaking my mind,” the woman continued.

She said she can no longer walk past a garda or a garda station without feeling physically sick and described how “the process to get justice has taken its toll”.

“My time is very precious as I don’t know how much time I have left,” the woman said before she added that the mental abuse she suffered was worse than the violence. “He was beyond evil with his words”.

“I thought having cancer was the worst thing that ever happened me but I believe he is worse than any cancer. I couldn’t endure any more pain and torture from this man,” the woman said before she added that she had considered taking her own life.

“He has robbed me of so much that I cannot get back. I was ashamed of what I put up with from him. The shame and judgement from other people allows the abuser to get away with so much,” the woman said.

“Women are afraid to tell the truth. I have survived him with cancer, so I want others to know they can too.” The woman concluded her statement by encouraging other people in a similar position to come forward.

On Monday Judge Nolan had adjourned the case overnight to allow him to consider an application by Mr Gillane to adjourn the case pending the preparation of a psychological report. He said if he refuses the adjournment he will proceed to sentence.

The man was remanded in custody pending that decision after counsel said his client was prepared to have his bail revoked.

On Tuesday Judge Nolan said a psychological report was not necessary. “It is inconceivable to me that it would change in any way my decision by reason of the five-year maximum penalty,” the judge commented.

Mr Gillane asked Judge Nolan to accept that his client had given 20 years of service to An Garda Síochána during which he did good and difficult work but accepted that the man has “brought dishonour to himself and the organisation”.

“Being a garda was something that he always wanted to be, and it was regarded by him as a great achievement and very, very important to him”. He added that it was an essential part of his identity and sense of self.

Mr Gillane said there was nothing in his client’s work and upbringing “either personally, professionally or otherwise” for anyone to “suspect or conclude” that he would end up in court for something as upsetting or serious as this.

Counsel said his client had had long-standing unaddressed mental health difficulties including depression and anxiety and said he was referred to a GP for help as an older teenager.

“People can, for a period of time, seek to keep the cork on the bottle, can operate both professionally and socially that can give no reason for concern, but eventually the cork comes out of the bottle and long overdue issues emerge,” Mr Gillane said. He added that in this case the issues that emerged contributed to devastating consequences for the victim.

He asked Judge Nolan to take into account the fact that his client has pleaded guilty, has said he is responsible for what he has done and there is a public acknowledgement of what he has done.

Mr Gillane said his client had “not put a foot wrong” before this offence and is now “stripped of everything that was important to him”.