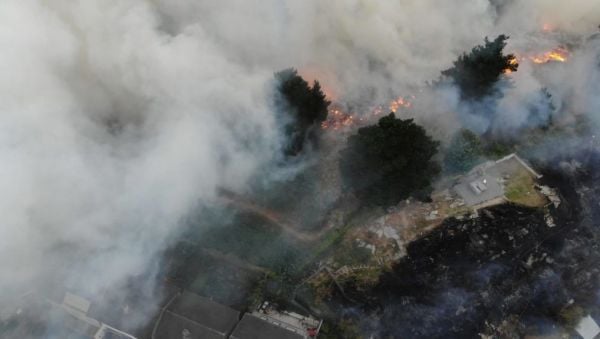 Two firefighters were injured and residents forced to flee their homes during a major wildfire in south Dublin that was brought under control overnight.

Smoke was visible across Dublin city on Monday evening after the gorse fire broke out on Killiney Hill at around 5.30pm.

The blaze came within metres of some properties, prompting the evacuation of a number of houses as a precaution last night.

Pumps, water tankers and an aerial drone to help concentrate firefighting operations were used in the battle against the blaze.

Firefighters remained on scene throughout the night and Greg O’Dwyer, assistant chief fire officer with Dublin Fire Brigade, said the blaze had been brought under control by Tuesday morning.

Four crews and pumps remain on scene at #Killiney.

Firefighters fought the fire throughout the night and a large logistical operation was put in place to ensure lighting and consumables such as BA cylinders and diesel were available.

“A lot of work was done over the night to protect houses. The fire came very, very close to houses,” he told Newstalk radio.

“This morning now we have four fire points there [with] some officers, and we’re going to use the assistance of the Air Corps to dampen down the area. The fire is well under control now, [we’re] just dampening down some of the hotspots that are still there.”

Darren O’Connor, station officer with Dublin Fire Brigade, said an Air Corps helicopter will lift off from Baldonnel this morning to complete water drops on the fire.

“At the moment it’s been scaled back now, there’s actually three pumping appliances in attendance and the Air Corps helicopter is going to lift off from Baldonnel shortly,” he told RTÉ radio’s Morning Ireland.

Two firefighters were treated in St Vincent’s Hospital overnight for injuries received when battling the wildfire, he confirmed. One received slight lacerations to his arm and the other received an eye injury.

A number of houses in the area were evacuated and the occupants have not yet been able to return as the perimeter line around the fire was being maintained, Mr O’Connor said.

The homes that were evacuated were on Glenalua Road and Glenalua Gardens, just off Killiney Hill road. “Eight homes were evacuated on that side and then there were some issues with properties on Claremont Road and Ballinclea Heights as well,” he said.

Mr O’Connor said work to contain the fire will continue throughout Tuesday.

“Just the hot spots, batting down and keeping an eye on it. That will continue throughout the day,” he said.

Humidity will decrease by midday and winds will increase, he added, with it hoped that any flare-ups or hot spots will be contained with the assistance of the Air Corps and by crews keeping a close watch.