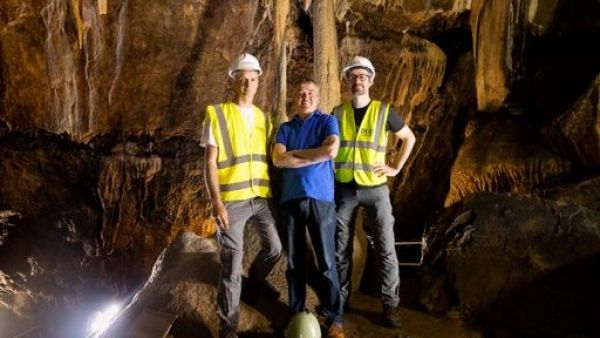 The station is one of nine seismic stations in Ireland, but it is the first to be installed underground.

Mitchelstown Cave was chosen as the site for installing the permanent seismic station due to its location within the quiet Galtee-Vee valley, where the station is protected from seismic noise sources such as wind, rain and heavy road traffic.

Since its installation in May, the station has detected earthquakes as far away as southern Peru and the Fiji Islands.

The Geophysics Section of DIAS operates the Irish National Seismic Network, under a joint agreement with Geological Survey Ireland, a division of the Department of the Environment, Climate and Communications.

Dr Martin Möllhoff, Director of Seismic Networks at DIAS, said: “The addition of the new seismic station at Mitchelstown Cave will contribute greatly to our understanding of what lies beneath Ireland and the structure of the Earth as a whole.

“Since the beginning of 2022 we have detected eleven earthquakes in and around our shores – all of this information is fed back to our data centre at DIAS allowing us to understand the world beneath us.

“ It is important that we are aware that, even though we may not feel it, the world is moving slowly beneath us all the time.”