‘Most remarkable’ day as Charlie Bird donates €3.3m in cheques to charity 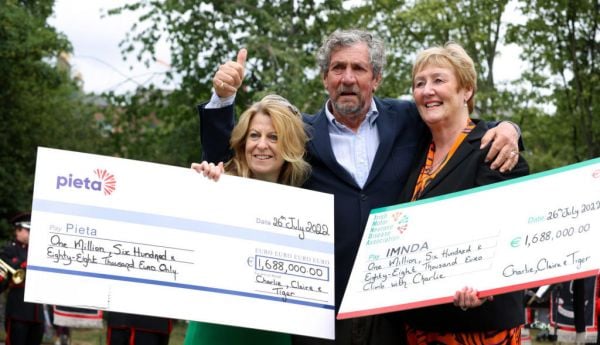 Retired broadcaster Charlie Bird has described donating more than €3.3 million to charities following his Croagh Patrick climb as one of the “most remarkable” days in his life.

The former RTÉ chief news correspondent, who was diagnosed with motor neurone disease last year, was joined by friends and family at an event in Dublin’s Merrion Park on Tuesday.

Mr Bird thanked people across the country for their “unwavering” support as he presented two cheques, each worth €1.688 million, to the Irish Motor Neurone Disease Association and mental health charity Pieta.

He said: “This is one of the most remarkable days in my life…Last October I was diagnosed with a terminal illness and I’ve had many dark days since then.

“But remarkably here this morning, is one of the happiest days in my life.

“The people who I have to thank for this are the tens of thousands of people from all corners of Ireland and abroad who made this day possible with your unwavering support for Climb With Charlie.”

He added: “For me the 2nd of April this year turned into a national day of kindness, friendship and celebration.

“This cheque which I have in my hand for almost 3 million almost 400,000, yes you heard me correctly, is simply down to the support of so many kind people from right across Ireland and many places abroad.

“This is your achievement.”

RTÉ broadcaster Joe Duffy, who was MC at the event, said: “What Charlie evokes in all of us is a feeling which will not be forgotten.”

“We’re here today because of one man and one man decided that when nothing short of tragedy befell him that he should instead of being a receiver, be a giver,” he added.

In early April the broadcaster was cheered on by hundreds of people as he achieved his goal of scaling the summit of Croagh Patrick in Co Mayo.

Good news this is a big week for everyone who supported climbwithcharlie. We will be handing over two cheques for well over ONE AND A HALF MILLION Euros EACH to the two charities. I wish I could hug everyone of you. You have all helped me so much in this dark period of my life.

His challenge caught the imagination of the public and thousands of people completed their own Climb With Charlie events all over Ireland and further afield on April 2.

Climbs were organised as far away as the US, Australia, South Africa and Spain.

The campaign aimed to help and show support for those who have their own physical and mental mountains to climb on a daily basis.

The event in Dublin was attended by Defence Forces Chief of Staff Sean Clancy, the Army Band 2 Brigade and several senior Defence Forces officers who took part in the Croagh Patrick climb.