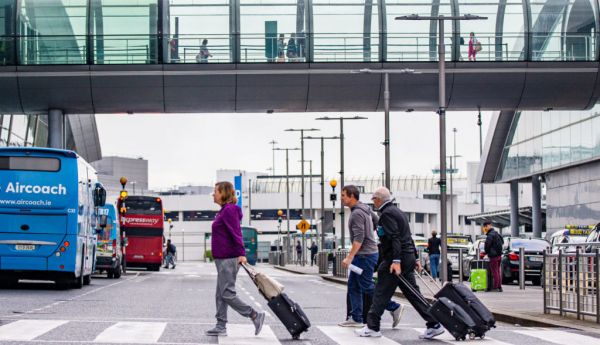 A committee has been told there are almost 4,200 lost bags in Dublin Airport, and it is “like trying to climb a sand dune” to return all baggage to the owners as the busy summer period continues.

The Oireachtas Transport Committee also heard that the Defence Forces are not expected to be needed to help the airport with Covid-related staff absences, which are lower than expected.

In recent months, passengers have complained about long queues at the airport, flight delays and cancellations, and lost baggage, particularly in relation to connecting flights.

There have also been complaints about cleanliness and poor food and drink facilities once passengers pass through security, as international travel rebounded quicker than expected after the Covid-19 emergency.

Darren Moloney, managing director at Sky Handling Partner (SHP), told the committee the ground handling firm has 2,897 lost bags at Dublin Airport that need to be reunited with their owners.

He said his firm can process 350 bags a day, and it would take two weeks to clear that number and reunite them with their owners, but it is still receiving 270 more each day.

Tony Tully, director of ground operations in the UK and Ireland for ground handler Swissport, told the committee it had “less than 100” passengers waiting to receive luggage from Dublin Airport, and the firm expects the majority to be returned within the next week.

The committee heard that Swissport and SHP handle around 10 per cent of baggage at Dublin Airport each, with Ryanair and Aer Lingus handling the remaining 80 per cent.

Aer Lingus has around 1,200 lost bags at the airport, with the ability to process 700 bags a day and around 450 new bags arriving daily, the committee heard.

Gerard Kenny of SHP said one of the reasons its lost baggage numbers are so high is staffing issues at European airports and airlines resulting in some flights arriving with “no baggage loaded… at all”.

“Some airlines even choose on a daily basis which flights they’re not going to load because they too don’t have the resourcing capability. Thankfully we haven’t had that out of Dublin, to my knowledge, certainly not from ourselves.

“But it means that it’s like trying to climb a sand dune at the moment in Dublin – as soon as we start to make some progress through baggage, another aircraft could come in missing 60 bags or missing all of its bags, potentially.”

Mr Moloney added that the DAA (Dublin Airport Authority) and SHP have found a secure location next to Terminal 1 and Terminal 2 where teams can process bags for local delivery by courier or reflighting.

Representatives of Aer Lingus, DAA, Swissport and SHP appeared before the committee on Tuesday to answer questions about problems passengers have experienced.

Mr Moloney told TDs and senators that the number of “short-shipped” bags from international hubs that feed Dublin Airport, such as London Heathrow and Amsterdam Schipol, “has been at an unprecedented scale and continues to prove extremely challenging”.

“Some European airports have imposed passenger or flight caps to minimise disruption for the remainder of the summer season. Likewise, there has also been curtailment of certain airline schedules and it is expected that this will help alleviate, but not eliminate, the instances of short-shipped baggage.”

The committee heard there are no plans to impose a flight or passenger cap at Dublin Airport.

The two baggage-handling firms said experienced employees leaving for “more stable employment” during the pandemic, plus new enhanced background checks needed for staff, have led to retention and recruitment issues.

“The newly introduced enhanced background checks in January 2022 resulted in a complete standstill in the approval and issuing of airport ID passes, effectively resulting in no employees being recruited in the first three months of the year,” Mr Tully said in his opening statement.

Challenged on this statement by independent senator Gerard Craughwell, Mr Tully said a lot of staff voluntarily went into cargo logistics “because there was a high demand” for it, as Swissport lost 80 per cent of its activity and SHP lost 75 per cent.

Answering questions about flight cancellations, Aer Lingus chief executive Lynne Embleton told the committee it operated one of the most “robust” schedules in Europe, with 98 per cent of flights operating as planned in June and almost 100% in May.

“So the vast majority of our customers and their baggage was successfully delivered,” Ms Embleton said.

DAA managing director Vincent Harrison said it was “broadly” accurate to say it will be mid-August before the airport is operationally back to normal, and that as Covid-related absences are under 10 per cent, the Defence Forces are not expected to be required to help.

“We’re quite confident at maintaining the level of service that we’re delivering at the moment,” he said.

“But as we committed to in our previous session, we have focused particularly on the highest priority areas that, in the early stages, was ensuring that people didn’t miss flights.”