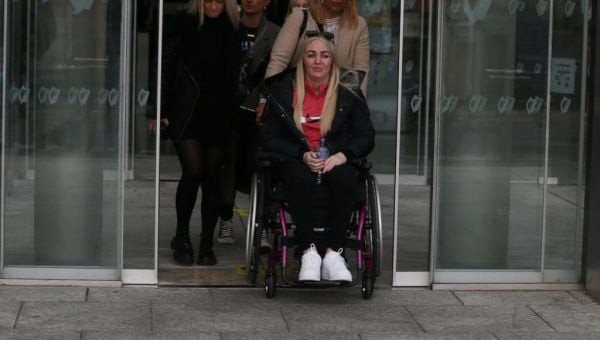 A second Dublin man has pleaded guilty at the Central Criminal Court to possession of a semi-automatic handgun in connection with the attempted murder of a mother who was left paralysed after a shooting at her home in the city last year.

Mother-of-one Sinead Connolly was shot while her eight-year-old daughter hid under the kitchen table in their home at Bernard Curtis House apartments in Bluebell, Dublin 12, in March of last year. Ms Connolly suffered paralysis below the chest as a result of her injuries.

She told the court that the gunman – Dean McCarthy (33) – was “an evil, sadistic and cowardly bully” who led a campaign of abuse against her before leaving her permanently paralysed in the attempted gun murder, which had “obliterated” her and her family’s lives.

On Tuesday at the Central Criminal Court, Paul Mooney (34), with an address at Ring Street, Inchicore, Dublin 8, also pleaded guilty to possession of a firearm and ammunition.

Last May, Joseph Byrne (33), with an address at La Touche Road, Bluebell, Dublin 12, pleaded guilty to possession of the same firearm with intent to endanger life in Bluebell on the same date.

Byrne also pleaded guilty to having in his possession Luger Barnaul ammunition, in such circumstances as to give rise to a reasonable inference that he had not got in his possession for a lawful purpose on the same occasion.

Prosecution counsel Anne-Marie Lawlor SC told Mr Justice David Keane today that the victim Ms Connolly is confined to a wheelchair and that she [Ms Connolly] was anxious to get the matter disposed of.

The matter was listed for mention on October 4th and Mooney was remanded on continuing bail.

Last April, Dean McCarthy was jailed for 15 years after he pleaded guilty to Ms Connolly’s attempted murder on March 6th, 2021.