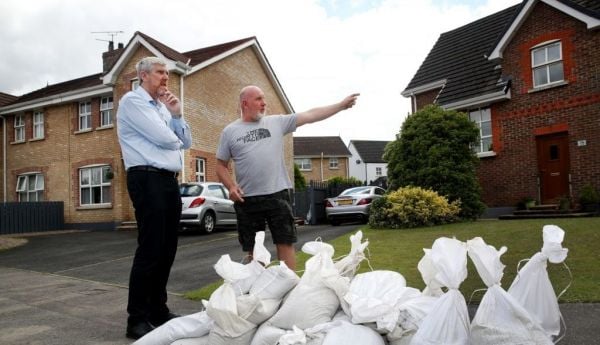 The North’s Infrastructure Minister John O’Dowd has defended his department’s response to weekend flooding of homes during a visit to Derry and Strabane.

Mr O’Dowd said the event was “devastating” for those impacted as he met with residents and business owners affected.

Councillors in Derry had previously criticised the Sinn Féín minister’s Stormont department, claiming it had been too slow in responding to the heavy rainfall.

Mr O’Dowd visited homes and business in Drumahoe and Eglinton and other parts of Derry and Strabane where he said at least 30-40 homes are known to have internally flooded.

His department said that up to 300 homes in total are being assessed to determine if they were impacted when 70mm of rain fell in five hours on Saturday.

The minister said: “I understand this is devastating for those who have had their homes and personal property damaged and, especially, those who have been impacted by previous flooding events.

“Witnessing and hearing accounts first hand of the consequences the flooding has had on families and livelihoods is truly heart-breaking.

“I would like to thank everyone who came together to assist with the clear up and who provided food and shelter to the communities which were most badly impacted.

“Very high levels of rain fell in a short period of time on Saturday and my department remained on full alert working with multi-agency partners over the weekend to protect properties through the distribution of over 8,000 sandbags and the maintenance of critical drainage infrastructure.”

Mr O’Dowd added: “I also fully recognise the need to introduce longer term solutions as swiftly as possible to reduce the impacts of further flooding.

“That is why my department is taking forward a number of flood alleviation schemes across the north.

“We are currently progressing proposals for three specific schemes in Drumahoe, Eglinton and Derry City.

“Ground investigation works have already been completed at Eglinton and Drumhoe which will aid design development and will be used to determine the type of defence that can be constructed at each location.

“Significant progress is being made and subject to being able to demonstrate economic viability and affordability, it is intended that these schemes could then progress via design and procurement exercises to appoint contractors for the works.

“In addition, the Department’s Living With Water Programme has commenced work on a draft Strategic Drainage Integrated Plan (SDIP) for Derry. This will consider a longer term 10-year drainage plan for the city and involves a range of partners and stakeholders across all areas of government.

“I have already given my commitment to bring forward improvements in the Ballycolman estate, Strabane with a short term solution being actively progressed in conjunction with Derry City and Strabane District Council.

“I will also continue to progress a longer term solution for Ballycolman which is dependent on the provision of a new sewer required to serve the proposed housing development at the old Adria site, with timing subject to the developer’s programme.”