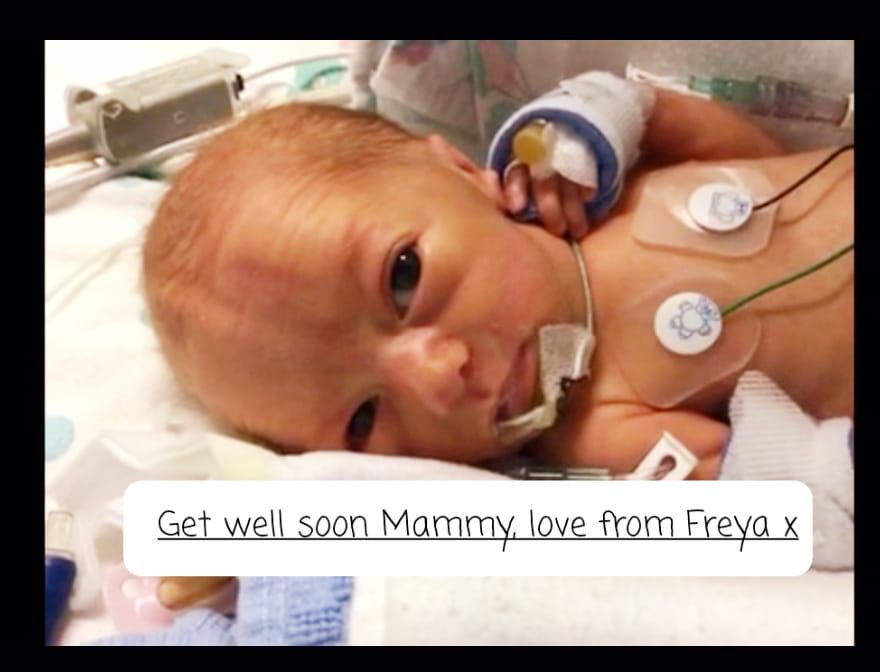 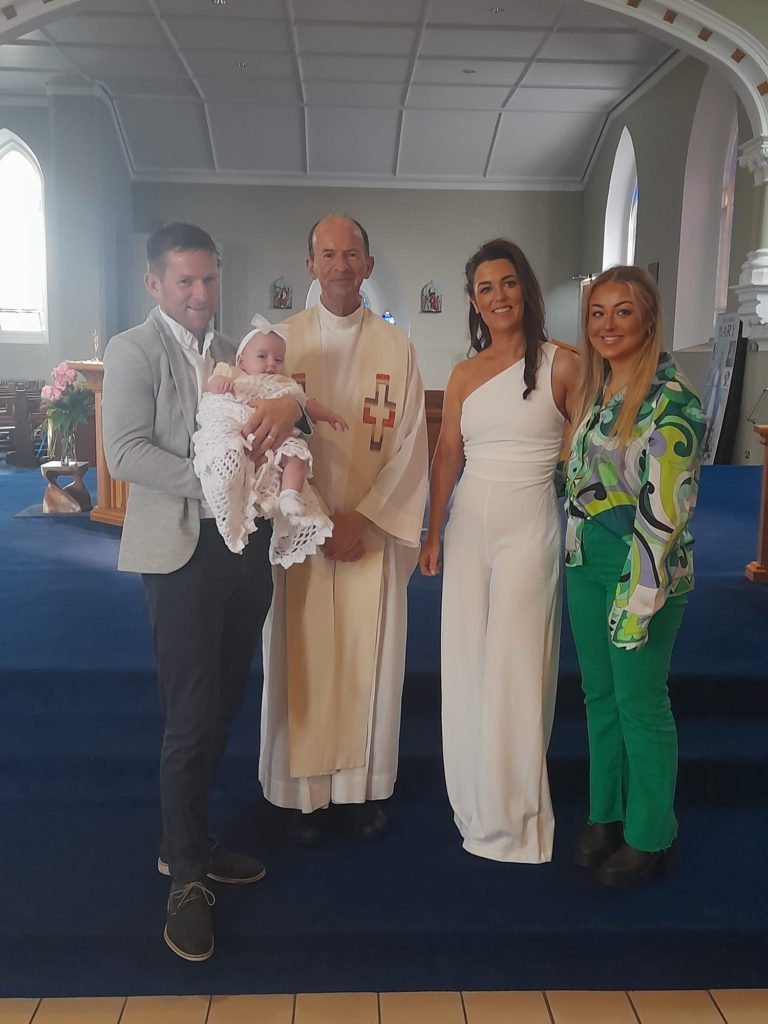 Charlene Murphy with her husband Padraig, daughter Kayla and baby Freya at Freya’s christening by Fr Brian Maquire PP Tullow at the weekend

THE extraordinary journey taken by a Tullow family to bring their baby girl home will be relived in a fundraising cycle this weekend.

‘Dublin to the Déise: Our journey for Freya’ has been organised by Charlene and Pádraig Murphy, who experienced a terrifying ordeal last February, when their daughter Freya was born prematurely. Then, without explanation, Charlene’s health rapidly deteriorated, leaving her fighting for her life in ICU.

The fate of Charlene (née Butler) and baby Freya united the entire community as the Butler and Murphy families desperately hoped for a miracle. Thankfully that miracle came when, after 21 days, Charlene and Freya were reunited. Both now enjoy full health, with the family celebrating Freya’s christening at the weekend.

The 160km fundraising cycle on Sunday 31 July and Monday 1 August will begin at St Vincent’s Hospital and end in Waterford Regional Hospital, taking the positive from that journey to raise funds for both hospitals.

“Freya arrived unexpectedly, close to eight weeks early, at St Luke’s Hospital, Kilkenny. She weighed just 3lbs 12oz, so our main concern was that our baby girl would be okay,” explained Charlene.

The following day, Freya was transferred to Waterford SCBU.

However, 17 hours after Freya’s birth, Charlene’s health started to deteriorate and she was moved to the ICU in St Luke’s Hospital.

“Unfortunately, things didn’t improve; instead, my condition rapidly declined. In the early hours of Saturday morning, 5 February, I was transferred with a full medical team to St Vincent’s Hospital and within hours of my arrival my husband was advised that I was in renal failure and to call my parents and daughter Kayla to the hospital,” recalls Charlene.

“I have no memory of what happened from 5 February to 17 February. On the Sunday morning after arriving in St Vincent’s, I was put into an induced coma, with the various medical teams not knowing what was causing my condition to deteriorate further.

“The following days were scary for my family and friends, waiting for positive news just by text updates every few hours. During this time, my husband was also making the journey from St Vincent’s to Waterford, where the amazing midwives took care of our daughter Freya,” said Charlene.

After a long week of intense treatments, the medical team started to bring Charlene out of the coma; however, due to the ill-effects of various medications, her mind was not functioning properly and she couldn’t speak.

“It took four to five days before I became lucid and regained my speech. I suffered hallucinations for many hours and had no recollection of having our daughter Freya, which became extremely frustrating and upsetting,” explained Charlene. “Thankfully, the wonderful memories of Freya’s arrival subsequently returned,” she adds.

Charlene described the care she received in intensive care as nothing short of amazing.

“I will forever be indebted to the staff in all three hospitals, and in particular to my knight in shining armour Dr Veni, who was with me at all times in Kilkenny hospital and went above and beyond to ensure I had the best treatment,” she added.

During her three weeks in St Vincent’s, the amazing staff in Waterford SCBU cared for Freya every second of the day.

“I spent 21 days apart from my new-born daughter, which no parent should ever have to endure, but the lengths the staff in all hospitals went to in order to give us any form of contact was truly amazing,” said Charlene.

Charlene continued to make gradual progress until, on 24 February, she was told she could make the journey from St Vincent’s to Waterford SCBU to see Freya. “We made that journey that day and it is a day I will never forget, finally being able to hold my little girl in my arms,” said Charlene.

“Freya remained in the amazing care of Waterford SCBU until 10 March 2022, when we finally got to bring her big sister Kayla down to meet her little sister and all four of us travelled home together. What a day!” she recalls.

In order to give something back for the amazing care they received, Pádraig, together with some family and friends, will make the journey once more from St Vincent’s Hospital to Waterford Hospital, but this time on a bike. From Dublin to Tullow on the Sunday, then Tullow to Waterford on Bank Holiday Monday. Charlene will join family and close friends on the final 50km leg from Gowran to Waterford.

The money raised will go towards purchasing top-class exercise bikes for the haematology ward in St Vincent’s Hospital, to assist patients in their recovery with their mobility. They will also purchase noise detectors and specialised rocking chairs for Waterford SCBU.

“We were extremely overwhelmed by the well wishes and support among the community and from family and friends near and far and are so thankful for each and every prayer and well wish,” said Charlene.

“From the bottom of our hearts, thank you,” she added.

To help their fundraising efforts, go to www.gofundme.com/dublin-to-the-deise.